Sharing some thoughts on the treatment meted out to Cdr Kulbhushan Jadhav’s wife and mother by Pakis, in what could easily have been a show of goodwill instead.

(a) Forced removal of any Hindu symbols – choori, sindoor and mangalsutra.

(b) Forced to change clothes.

(c) Glass partition, ensuring physical separation, as if they would have otherwise blown up the building

(e) Forced not to converse in their mother tongue

(f) Repeated interruptions while the mother was talking to him

(g) While approaching the site, being forced to disembark before the entrance and unnecessarily walk rest of the distance (refer screenshot of @rajfortyseven tweet) 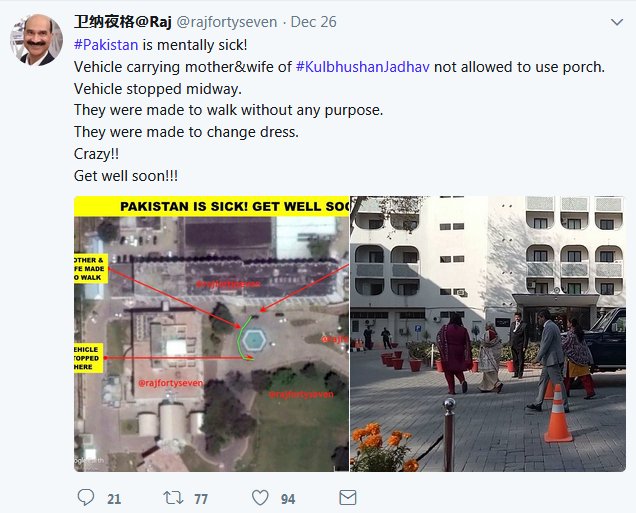 (h) Meeting commenced without presence of the Indian Deputy High Commissioner, who had to fight his way in.

(i) And the media. Who can forget the Paki media and their ‘questioning’ of the visitors? (Refer THIS tweet).

Btw, this was despite an agreement that media won’t be allowed close access to the visitors. Now comes the question, how does one view this. My TL has been abuzz with this since yesterday.

As far as my reaction goes, yes I am outraged too.

In fact, on the contrary, I would have been (pleasantly) surprised had the Paki security establishment allowed the visit to go in a dignified manner. But that is too much to ask of them. And they didn’t disappoint me either.

Now the question is, where does this insane hostility come from. Of course, they will cry hoarse at ‘Big, Bad India’. I’ll not argue with that since they are welcome to their own point of view.

There was amazing similarity in which the establishment went about conducting the visit, and the media doing its own bit. This is an interesting phenomenon indeed – the way the Paki state brings up its children to adulthood, fed on a potent propaganda right from the word go.

But first let us see how it manifests itself. Here are some public personalities, those that are supposed to be exposed to media and experienced in handling themselves in public.

Quote, ‘If I speak truthfully, they just can’t have the kind of heart a Muslim has or a Pakistani has. I think they don’t have the sort of big hearts, pure hearts, Allah has given us.’

Btw, this is the same Afridi one of whose cousins was dispatched by the BSF in Kashmir in 2003 (LINK)

Then there was another international cricketer, Shri Sohail Tanveer and his reasoning at not being selected for IPL in 2009 – Hinduon Ki Zehniyat Hi Aisi Hai
The small issue of Mumbai Terror Attack didn’t figure, though!
YouTube Link: https://www.youtube.com/watch?v=vkk3GPu8IU8
What is interesting in the above video is not merely the choice of words by Tanveer, but the wholehearted endorsement by the female anchor and the subsequent question by the journo – ‘Didn’t you know about Hindu Baniya – Muh Men Raam Raam Bagal Mein Chhuri?’
Moving on, here is a Paki comedy show where the word ‘Hindu Kutta’ not only comes out matter of factly but also elicits a wholehearted laughter from the audience
YouTube Link: https://www.youtube.com/watch?v=Tn0QQ2IIh2c
And if you think that the ‘Hindu Kutta’ thing is a one off event in a comedy show, you couldn’t be more mistaken! Late JN Dixit, during his tenure in the Indian High Commission in Pakistan was given a live demonstration, that too by a six year old child! 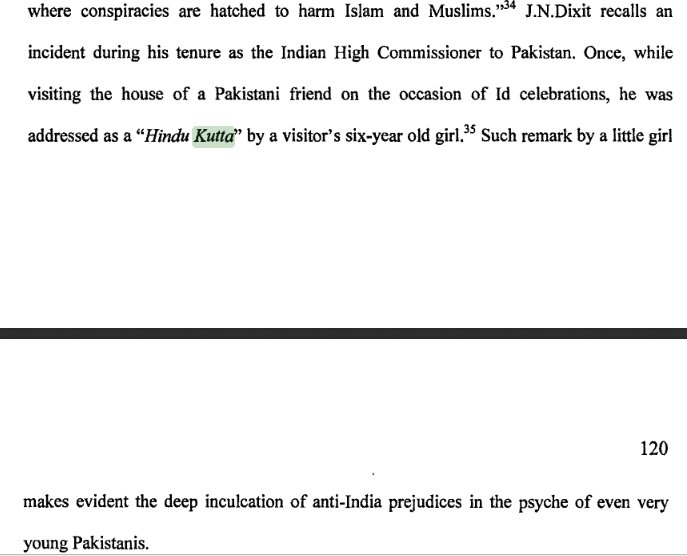 Let that sink in a bit.

A kid of someone definitely high up in the Paki establishment / society.

A kid not yet old enough to make her own opinions.

A kid with her mind poisoned by her parents

A kid who will no doubt grow up with a blinkered view of Indians as ‘Hindu Baniya’ an ‘Hindu Kutta’
But is it just her parents that are to blame?
This is where the Paki establishment has been at its best – bringing up generation after generation of post 1971 kids with this blinkered world view.
I did a three part blog series on that. Here’s a LINK to the second blog post of the series, containing the meat of the matter.
Do read.
I insist.
We talk about madrassas as incubators of hate, right?
Here is what the state sanctioned school curriculum teaches little children in Pakistan.
These are a couple screenshots from the blog post linked above. 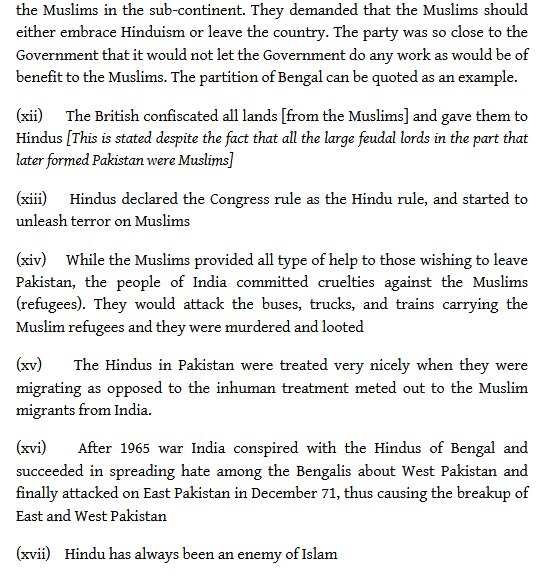 Last two points in the above list beg a closer scrutiny.

Point 17: Hindu has always been an enemy of Islam.

I think the previous 19 tweets have enough examples of how it manifests in the current Paki discourse. And no, it is not just a fringe that holds this point of view. Those that think so are being ostriches. It is how the Pakistani state brings up its children.

In fact, in 2004 the Information Minister of the Govt of Pakistan was forced to apologise to the religious parties in the National Assembly after the Education Minister questioned the relevance of verses glorifying Jihad in Class XI Biology textbooks! (LINK)

Coming back to the screenshots in tweet number 20 above.
Point number 16: After 1965 war India conspired with the Hindus of Bengal & succeeded in spreading hate among the Bengalis about West Pakistan and finally attacked East Pakistan in Dec 71, thus causing the breakup of East and West Pakistan.
Very cute, I must say!
Propaganda by a defeated army to still justify its relevance in national discourse is understandable. But when that propaganda becomes the national discourse itself, this is what happens.

Can one really blame this person for saying what he says? And this despite his OWN govt releasing a stamp with the figure of 93,000?

At some level, one does find sympathy for this one being brought up in an environment that hides the truth and works up the hatred inside him in order to shirk it’s own failures.
But sympathy won’t work because we are too far down the road of lies and hatred.
Here’s just one example of this dysfunctional state – An dastardly attack on school children, owned up by a local terror outfit.
But no, it was India that did it!

No introspection needed when such a convenient enemy is available.
This poster in the funeral prayer for the children says ‘The blood of children will result in fall of India, US, Israel’
Well, then, all the best to you, I say.

A word about the all powerful army that has ruled Pakistan very nearly since its inception. People tend to say, that the army is the only bastion left that is preventing a fall of a nuclear armed Pakistan into chaos.
I’d beg to differ a bit
It is the fauj that has led Pakistan down the abyss it stares at today. Sane minds in the Khakis, you said? Just read this piece https://www.theatlantic.com/magazine/archive/2002/03/a-modest-proposal-from-the-brigadier/302441/ …
The Brigadier in question had direct access to PM Benazir Bhutto.
Here’s a quote from the Brigadier – “We should fire at them and take out a few of their cities—Delhi, Bombay, Calcutta,” he said. “They should fire back and take Karachi and Lahore. Kill off a hundred or two hundred million people…….”
Some more on the ‘sane’ minds of the Paki Fauj. Here’s a snap of former DG ISI, Lt Gen Hamid Gul sharing a stage with Hafiz Saeed
’nuff said!

With ppl like these virtually running the country, can one really blame its common folks for their particular world view?
Everything is justified by ‘Indian Terror’.
No going into details, not questioning anyone.
One word answer – Indian Terror!

Lastly, a word about the so called Track II intellectuals.

Here is one sample. The question of “ill treatment” (note the double quotes) is easily brushed aside by ‘But India Also So Bad’.

This one justifies the humiliation of a wife and a mother by the diplomatic engagements and denial of the ‘god given right’ for Paki artists and sportspersons to make money off India and yet continue spewing venom!

Btw, @gauravcsawant‘s TL as on 27 Dec 17 has a very interesting conversation with her.

Oh, and talking about Paki artists / sportspersons, HERE is a short, 13 tweet thread on they mooching off Indian money and supporting terror inside India. Some very interesting data points in there.

In the end, I’ll repeat what I said earlier. Despite all their reluctance, this was a god given opportunity for the Paki establishment to come out as a bunch of pragmatic folks.

But like I said, I am not surprised that they made a complete spectacle of it instead.

Regarding Cdr Kulbhushan Jadhav, I will just repeat what I said some months ago.

I doubt he will breathe a free man again.

I’ll be glad if he does, but I doubt.