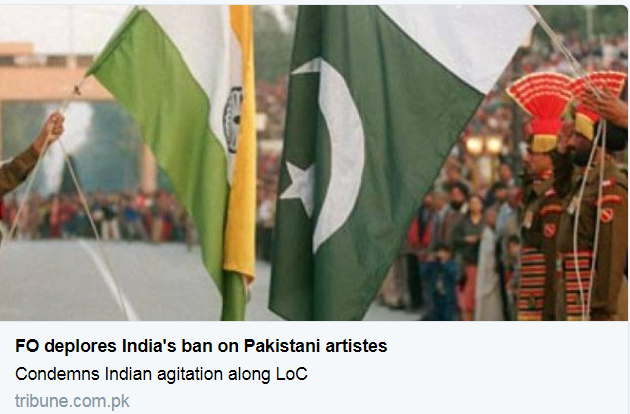 So this landed up on my TL some time back – About Paki artists no longer being welcome in Bollywood, prompting me to share some thoughts on the subject that were first tweeted about two and a half years ago. Here goes ..

With the Pakistani State apparatus actively fomenting / sponsoring terror inside India, each and every Pakistani citizen paying tax to his Govt in whichever form, is actually enabling it kill Indian soldiers and civilians.

The State support for terror is blatant. At times it is apparent for all to see as in Punjab Govt budget catering money for Hafiz Saeed’s JuD. (Pakistan’s Punjab Government allocates funds for JuD centre)

Other times too it is quite apparent, esp when a retired Terroristani Army Chief boasts about it. This specimen refers to use of terrorists as ‘the asymmetric war led by men with high motivation’. Very clever, I’d say! (DEVISING A ROBUST DEFENCE POLICY: Mirza Aslam Beg)

Since terror is a State policy of the Islamic Republic of The Land of the Pure, I’d rather constrict the resources available to them to do so, or at the very least, try not to add to the funds available for them to do so. A Ghulam Ali, talented as he might be, making money off you and me will pump most of it in Pakistani economy, ultimately putting it to use to kill my countrymen.

Same goes for cricket. A Sohail Tanveer would be happy to make money in IPL, and when denied a chance to do so after the Mumbai terror chooses to blame the Hindu mentality for refusing to deny him his ‘haq’ instead. Also note how the anchor too chips in with a ‘Muh Mein Raam Raam Bagal Mein Chhuri’.

Hindu Hatred is second nature out there.

At the end of the day, ‘Art has no Boundaries’ is a universal truth which I too endorse, but to say that you make money off me and use it to try and kill me, is something I’d be an idiot to endorse. Simply for this reason, I am all for chucking out terror sponsoring Pakistani artists / sportsmen.