Skip to content
HomeIndus Water Treaty – Time for a Rethink? 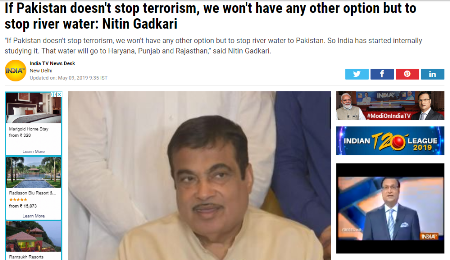 IF PAKISTAN DOESN’T STOP TERRORISM, WE WON’T HAVE ANY OTHER OPTION BUT TO STOP RIVER WATER: NITIN GADKARI

So I came across this news report earlier today (LINK)

This is BIG, folks!
Don’t dismiss it as a mere political statement in middle of an election season.
Let me explain how ..

Firstly, this is the first time someone as high up the decision making chain as a Union Minister has talked about the Indus Water Treaty in this manner.

What he talks instead is about stopping the flow of river waters into Pakistan.
Now by this, one can safely assume that he is definitely NOT talking about the three Western Rivers because stopping their flow is more or less impossible due to geographical constraints.

What he means is about the three Eastern Rivers, and amongst those too, the Ravi.
Now why Ravi?

Because the Beas in any case merges with the Sutlej well within Indian territory and the Sutlej itself is practically a trickle by the time it crosses the border into Pakistan.

Now as far as the Ravi goes, there has been a steady build-up by this govt regarding diverting excess water that flows into Pak & use it for own consumption. I blogged some thoughts about the same some months ago. Do have a look for a better understanding – On Ravi River Waters Flowing Unchecked into Pakistan

As far as the Sutlej and the trickle that still flows into Pakistan goes, the day Sutlej Yamuna Link Canal happens, that too will be history.

But then, I see this statement of the Minister not for what I have written in the above. What stands out in the above statement is this phrase – PEACEFUL RELATIONS AND FRIENDSHIP. Here’s a screenshot of the same:-

Now before I elaborate upon that, let me tell you about the circumstances in which the Indus Water Treaty can be abrogated by any party – THERE ARE NONE!

Para 3 of Article XII of the Indus Water Treaty states: “The provisions of this Treaty may from time to time be modified by a duly ratified treaty concluded for that purpose between the two Governments.” Unquote

So basically, there is just no exit clause for the treaty. It can never be unilaterally abrogated but instead, only be replaced by another treaty for formalizing the sharing of waters.

Now THIS is where the choice of words by the Minister is so significant.

‘Peaceful Relations and Friendship’ is what he said. Now where did this come from? For answers, refer the screenshot of the Preamble of the Indus Water Treaty below. The treaty was signed ‘In a Spirit of Goodwill and Friendship’!

In case the provisions of the treaty don’t permit unilateral abrogation, then lack of ‘Goodwill and Friendship’ could technically provide a way out. In case the very spirit behind the treaty is no longer existent, can the treaty itself hold?

And when a person of the stature of a Union Minister uses the same language, I’d prefer to believe that the same has, at the very least, been debated at the highest levels of the Govt.

Post Uri, the PM had even remarked ‘Blood & Water can’t flow together’. And today comes this statement about terror & water.

So, in a hypothetical scenario, wherein the GOI actually cites this lack of ‘goodwill and friendship’ and actually abrogates the treaty, what might happen?

Contrary to what some might say, or want, flow of the Western Rivers into Pakistan simply cannot be stopped! The Indus and Jhelum flow inside valleys flanked by huge mountains. The only outlet for their waters is towards Pakistan.

Even the Chenab, though only flanked by the Pir Panjal Range to its north, flows through deep valleys and drops as much as 24 metres per kilometre, making it too very difficult to divert.

So like I said, the Western Rivers will continue to flow into Pakistan.

What WILL happen in case the treaty is unilaterally abrogated / suspended by India is that own projects on the Western Rivers will no longer be forced to adopt sub-optimal designs due to whims of Pakistan leading to time consuming litigation / arbitration.

What WILL happen is that own projects will not suffer needless delays while we try to ‘satisfy’ Pakistani whims.

What WILL happen is that we shall no longer be bound to share the designs of own projects, making them further vulnerable to terror.

What WILL happen is that we will no longer be bound to abandon / modify own projects due to Pakistani ‘objections’.

What WILL happen is that we will no longer be bound to ensure a minimum flow in the Western Rivers as our big dams fill up and even thereafter.

Most importantly, what will happen is that Pakis will never be sure about their water supply. The Ravi in any case brings floods to them every monsoon, what will now happen is that the Indus, Chenab and Jhelum can also bring droughts every summer / sowing season.

THIS is why the use of the words – ‘Peaceful Relations and Friendship’ – by the Minister is so significant. It is a warning to Pakistan that things might already by in motion and the cost of sustaining their terror apparatus is about to go significantly higher.

4 thoughts on “Indus Water Treaty – Time for a Rethink?”