Ok folks, so this tweet has generated quite a few reactions on my TL as well as DMs.

In light of this, let me share my own thoughts on the topic of Indian troops for Afghanistan. Thoughts are still unstructured, but here goes!

Firstly, the question one must ask ourselves is WHY would anyone want Indian troops to help them with their own expeditionary wars.
Well, the answer to that, IMO, is two-fold.
Firstly, the sheer numbers that the Indian armed forces field could put any other army to shame.

Secondly, along with those numbers is the battle winning performance of such troops wherever they have been involved. And yes, I include Op Pawan when I make this statement. Will come back to that in a while.

So the reason why the USA would covet Indian troops to help it in Afghanistan is understandable.
But, should India be sending her troops to fight a battle in which we have hardly any stake whatsoever?
My answer – HELL NO!

Yes, I know there are folks who would disagree with me.

Let me just ask them two questions – Firstly, what would be the aim that you would give to the Indian Army in case they do end up going to Afghanistan, as you want them to?

Secondly, HOW MANY troops would you consider sufficient?

Let me take the first question first, and try and answer it with another one – What actually has been American aim in this war?

Heck, the Americans themselves no longer know what their own army is doing there!

The war started in 2001 with destruction of al Qaeda as its aim.

Then they wanted to turn Afghanistan into a democracy, something that the country had NEVER been, ever, and given its geography and culture, could never be.

Of course, they also wanted to rebuild the war-torn country simultaneously, sinking billions and billions of dollars without any plan.

Then there were those within the American administration who wanted to uplift the status of the women in Afghanistan.

There were yet others who wanted to reshape the regional balance of power between India, Pakistan, Iran and Russia.

Bottomline: There was absolutely no strategy worth the name!

To top it, they didn’t even seem to know who was the enemy that they were supposed to be fighting!

Was it al Qaeda?
Was it Taliban?
Or was it Pakistan?

But weren’t they supposed to be allies of the USA in the war, and weren’t they getting so handsomely rewarded with monies and what not, because of this?

But then, why was the Taliban always finding sanctuary inside Pakistan?
And why was Osama bin Laden found hiding in a garrison town right under the nose of the Pakistan Army?
Plus, why in the world were those logistics routes blocked for nearly six months by their ‘ally’?

Bottomline: The face of the enemy was al Qaeda, or even the Taliban, but the real enemy lived comfortably across the Durand Line, working on commands issued in Rawalpindi.

And icing on the cake?
America was paying them billions of dollars each year to kill her soldiers in Afghanistan!

So, in the end, if you have to fight Pakistan then why ask for Indian troops to go to Afghanistan of all places!

Heck, we can do a much much better job of it sitting right here along their borders in J&K, Punjab, Rajasthan and Gujarat, no?

Ok, so in a hypothetical scenario, we do end up agreeing to send our troops to Afghanistan even without a clear cut aim and our social media warriors go gaga saying now we can ‘exert pressure’ on Pakistan from two sides.

Let us say it happens.

Now comes the question – HOW MANY troops would you want to send there!
Let me come to that in a while.
For the time being, let me leave this map here for you to ponder over.
(I know this is an old map, but do indulge me for a bit) 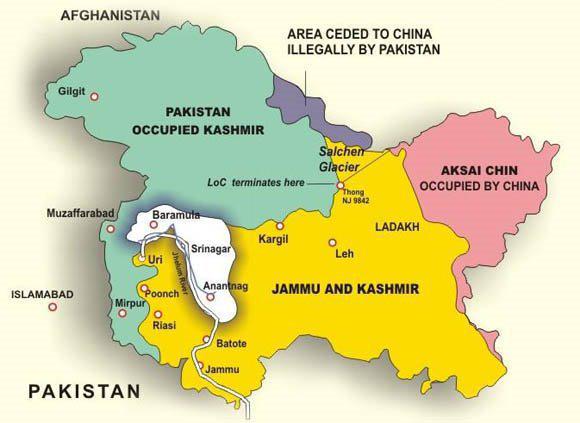 From the map above, just visualize the relative size of the Kashmir Valley.

Yes, just this much area takes up the bulk of the 63 Rashtriya Rifles battalions that wikipedia tells me there are, to keep under effective control.

Yup, feel free to ponder over that for a while.

Or would you want the template of the IPKF to be applied in Afghanistan?

Once again, wikipedia tell me that at its peak the Indian Army had FOUR divisions + two additional brigades worth of army troops inside Sri Lanka, duly supported by the Air Force and Navy.

Yet, they were once again confined to a very small piece of geography of Sri Lanka. They fought well, but India lost the war because at the end of the day, we had no clear, unambiguous political aim.

Anyone see any similarities with the American war in Afghanistan yet?

Of course, at its peak, the Americans and their allies had more than 150,000 troops inside Afghanistan, backed by an aerial armada which not even many European countries individually could boast of.

Yet, they were never ever close to any victory.

Secondly, the real enemy sat comfortable across the Durand Line, getting fat on THEIR dollars!

Why Pakistan got away without war despite the Parliament Attack, the Kaluchak Massacre (Anyone remember Indian PM’s ‘Aar Paar ki Ladai’ statement) or even the Mumbai attacks?

The answer – They were key ‘ally’ in the American war in Afghanistan.

And now when they are drawing down and bringing their own numbers to less than 10,000, you want the Indian Army to go there?

If despite such massive technological and numerical superiority the Americans couldn’t do zilch, what might even four Indian divisions aka IPKF achieve?

But Afghans are our friends, you said?

To this I’ll say it is not the Afghans we would be fighting there, it is the Pakistan Army and their terror proxies. And unlike USA, we wouldn’t have the luxury of just throwing away massive amounts of unaccounted dollars either!

Pressure on Pakistan, you said?

What bloody pressure on Pakistan can you exert sitting so far away from your own borders and sitting inside Afghanistan for god’s sake? Unless of course you are planning to invade Pakistan via the Khyber!

Point is, sitting in Afghanistan, you will only be dealing with Pakistani proxies and nothing else.

But wait, even if you are dreaming about the Indian Army marching victoriously through the Khyber Pass, who will be supplying them?

Yup, NOT ONE fan of sending Indian troops to Afg has yet talked about logistics!
Heck, even the Americans couldn’t quite answer that question, thanks to Pakistan!
On that note, I’ll just leave the screenshot of this 8 year old tweet of mine here to explain whatever it explains!

Yes, LOGISTICS!
And of course, money to sustain an expeditionary force in active operations!
Plus, political aim!

Now you see why I am personally not in favour?

But then, America is our friend, no? And friends deserve to be helped, especially since they hold the key to so much good that might come your way, right?

I actually agree with this wholeheartedly, especially when they have a transactional businessman guy leading them.

So what is it that can be done, you ask?

But it better be on our terms, or atleast on terms which will lead to mutual gain for both Indian and the USA.

To do that, all that needs to be done is to increase pressure on Pakistan!

And what better way of doing this than by being more proactive on the LoC?

Oh, wait, that is something which is already happening, right?

Well, things can always be calibrated upwards or even downwards for that matter.

All that needs to be done is to tweak the ‘game’ on the LoC by just a few notches for permanent gains, tactical or even strategic. Add to that the dire economic state that Pakistan finds itself in and you can guess how much of a spoiler they can be for the American game in Afghanistan.

The blackmailing game which Pakistan has played for so long can so easily be turned on its head that they wouldn’t know which way to run to, especially with China under extreme stress currently and the current state of their relationship with the Saudis as well.

Of course there are those who (rightly) say that we have to have a direct land route to Afghanistan via PoK / Gilgit-Baltistan before committing any troops there. But this is a discussion for some other day.

For the time being, however, I’ll be content to say that the Indian Armed Forces can help the American effort in Afghanistan from WITHIN OUR OWN BORDERS, or even a bit across from the borders, if needed.

But boots on ground in Afghanistan is only going to invite disaster, something that the Americans themselves have realized, especially with an ‘ally’ like Pakistan.
In our case, even the facade of being an ‘ally’ wouldn’t be there.
Rest I leave to your imagination.