Folks, here’s a post on the ‘motivated’ journalism by #NDTV. First noticed a distinct ’tilt’ some years ago. Chronicled some, missed .some. For all I know, I might be reading a bit too much into it all, but still thought of archiving my thoughts here on my blog. Here goes!

‘Alleged’ is a beautiful word, used with alleged ‘care’ to ensure the intended meaning is not lost on those who ‘matter’! 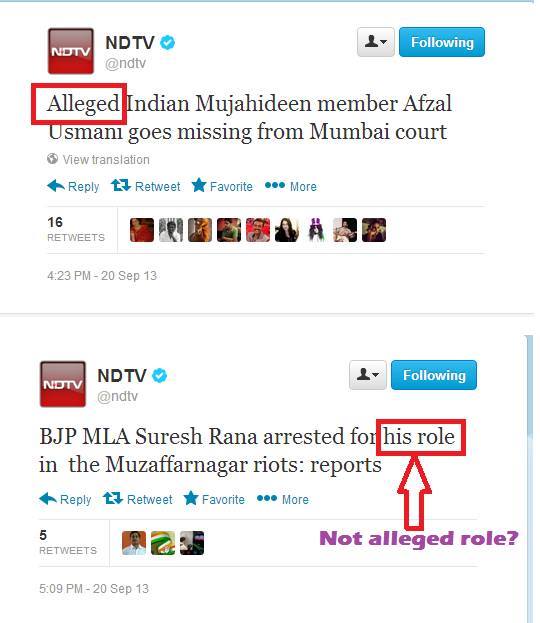 This is not my tweet, but quite a reputation that #NDTV have built 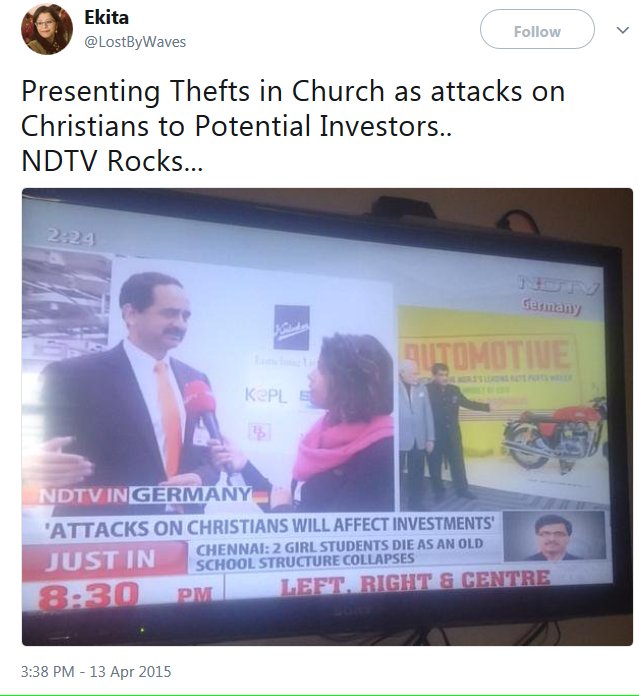 Then there is the issue of calling Kashmiri terrorists anything but that ‘T’ word. Happens far too many times to be a mere coincidence 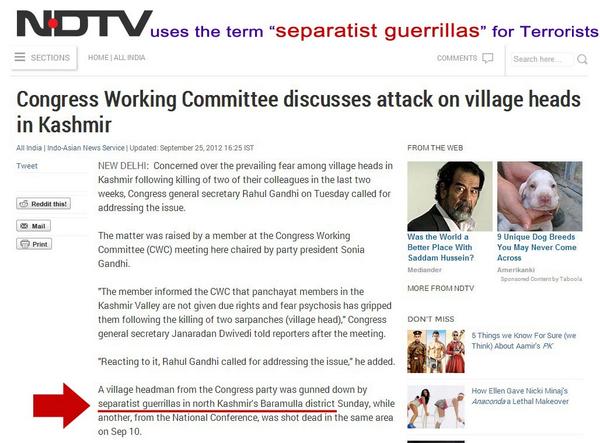 I guess we should just be grateful to #NDTV for not calling them ‘Freedom Fighters’. (atleast not thus far)

But we are getting ahead of ourselves. Getting back to ‘alleged’ .. apparently #NDTV is allegedly the BEST at use of the word ‘alleged’! 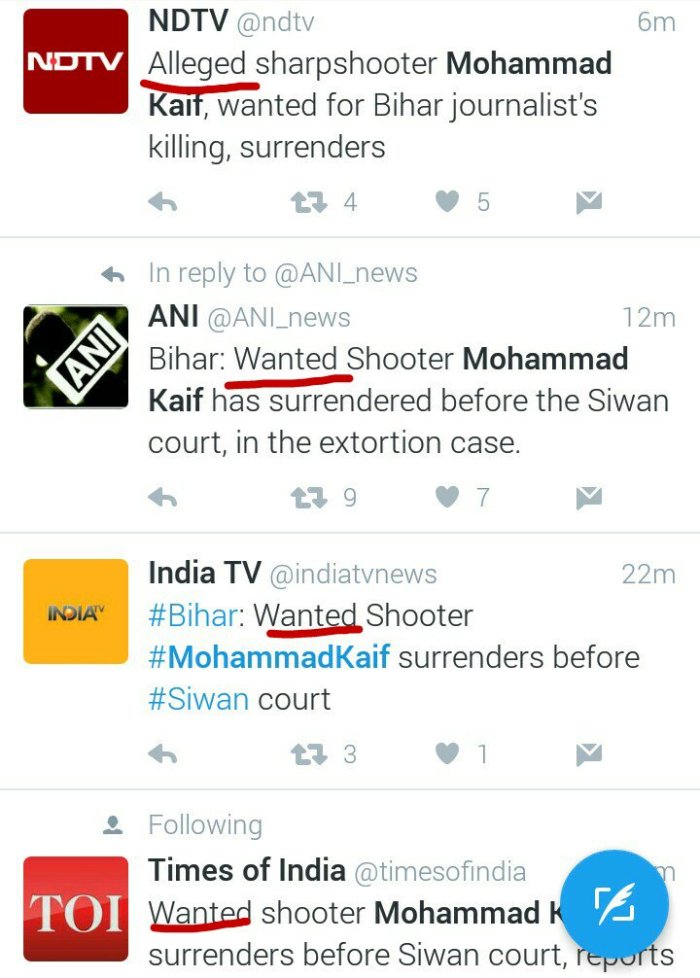 God bless the person who came up with this word, ‘Alleged’ .. a godsend for the good folks at #NDTV! It’s allegedly a way of life there! 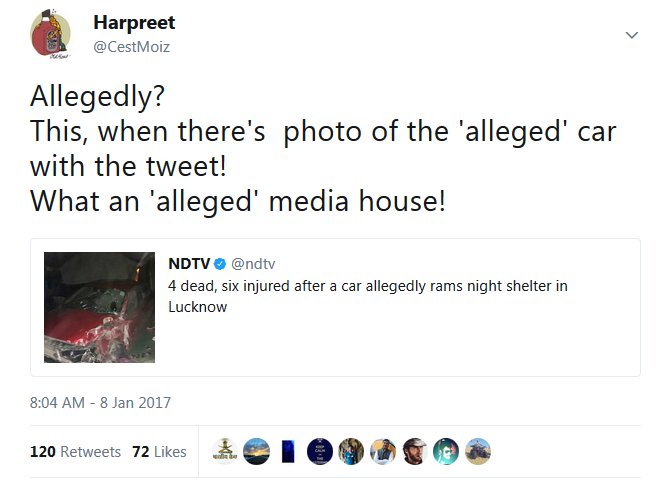 Sometimes one wonders if the keyboards at #NDTV offices have a special key to type in ‘allegedly’ in one touch! 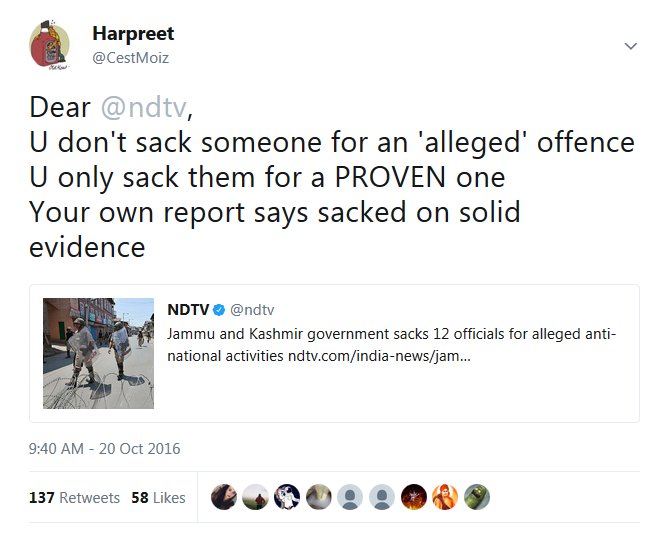 Then there is the ‘small’ issue of territorial integrity of the Union of India. Who needs PoK / Aksai Chin, no? 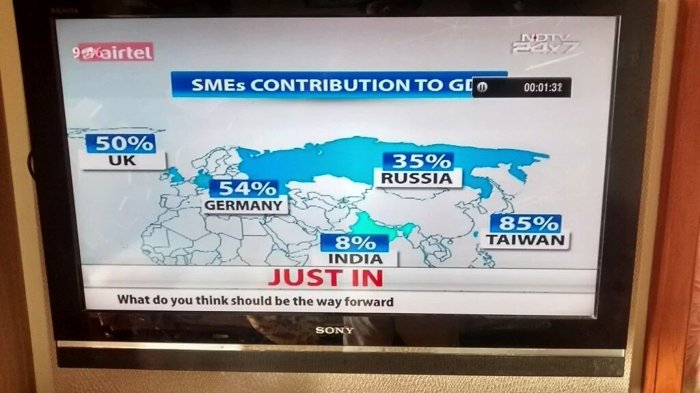 And just in case you missed it, #NDTV will ‘remind’ you. Over and over again! So very considerate of them, allegedly! (Map behind anchor) 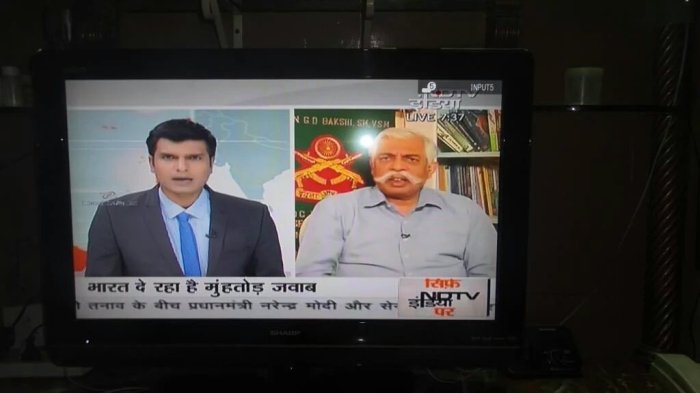 Apparently, #NDTV KNOWS what Indian Map looks like. They even did a pgme on that! Yet keep using wrong maps. I wonder why! 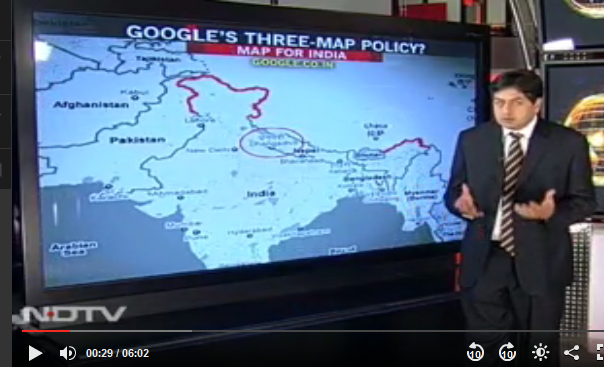 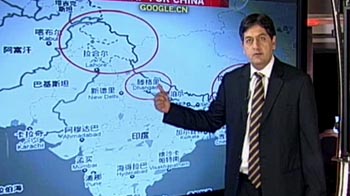 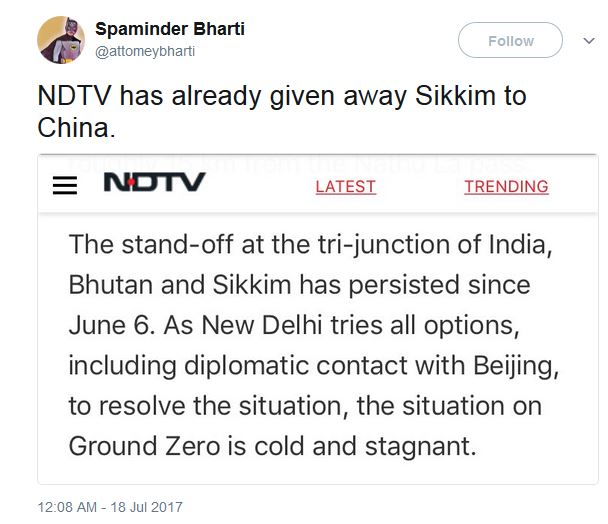 (IMO, the above isn’t a mere editorial error, but in perfect sync with PRC view that Sikkim still doesn’t belong to India, 2003 be damned)

Of course, then there is the issue of the ONLY Indian (some ppl might use ‘allegedly’ b4 that) channel that calls it ‘India Controlled’ 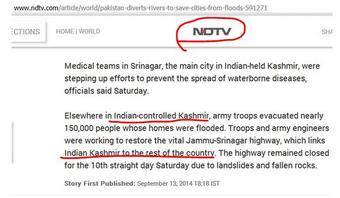 And that too isn’t a one off ‘incident’. Apparently there has been atleast 1 more instance of such ‘editorial oversight’ 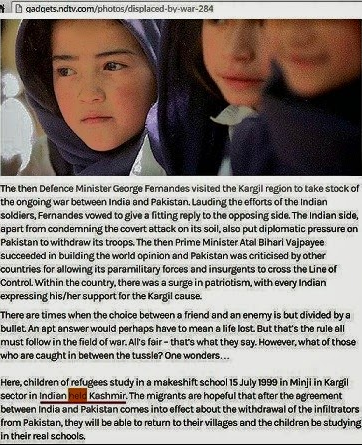 Of course, there is the small matter of Al Jazeera getting banned for depicting wrong maps, while other go away scot free! 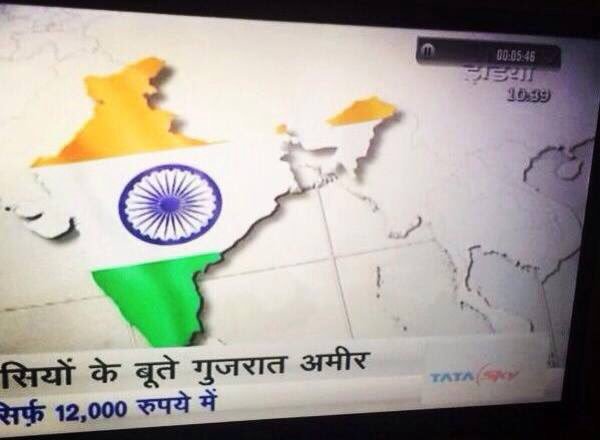 Moving on to editorial ‘oversights’. He is ‘a’ VK Singh. Of course, #NDTV won’t mention his rank which he carries even post retirement! 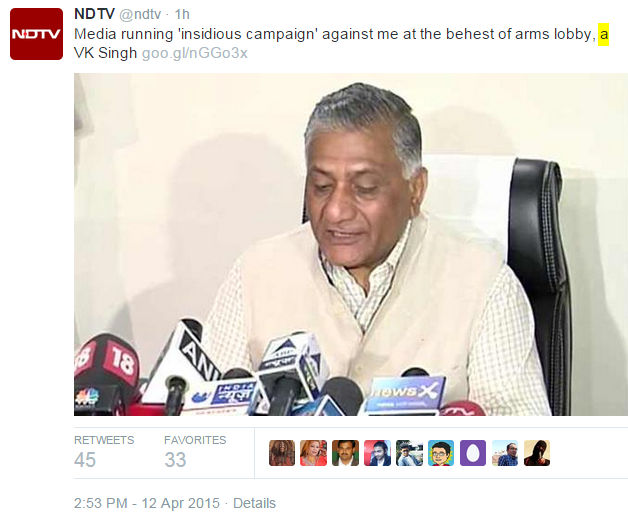 THIS I can believe to be a genuine editorial gaffe .. atleast it says ‘Indian Air Force’ on the ALLEGED chopper! 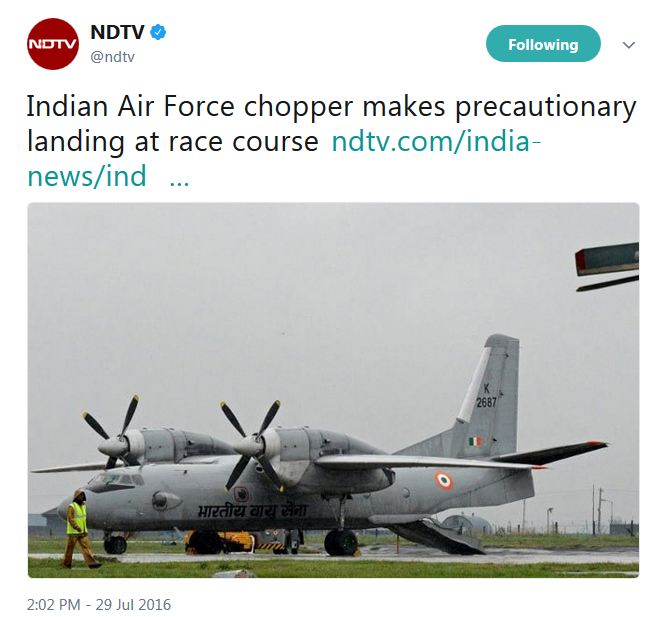 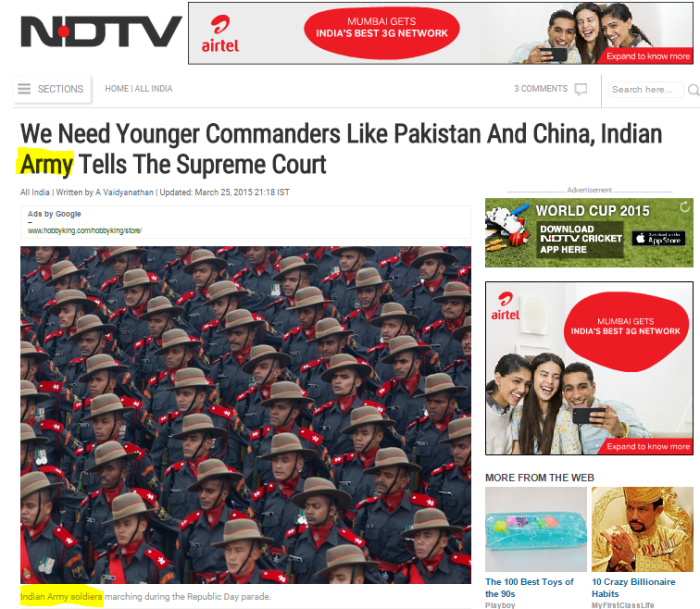 In this instance of alleged editorial error, no one can better the comment of @attomeybharti right below the alleged #NDTV tweet! 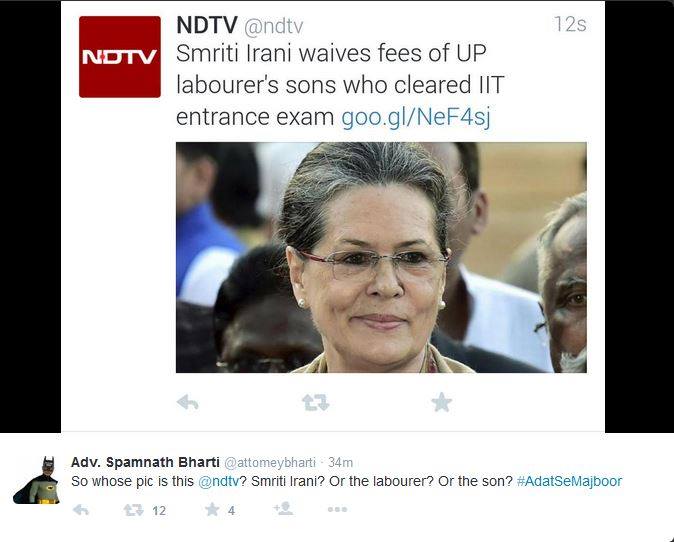 Damn, I missed this one – another #NDTV tweet putting Indian territory up for negotiation. Yup, ‘disputed’ is the official GOI line, no? 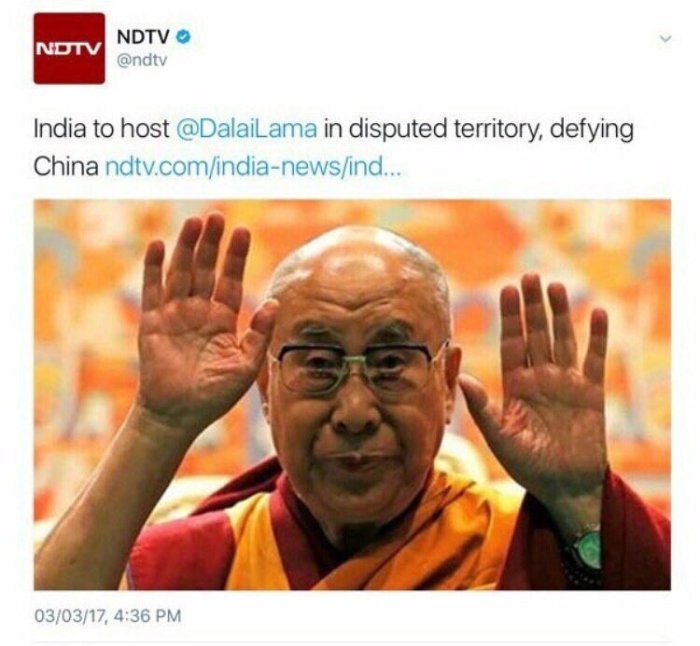 Report on Myanmar Raid. Using a picture of an IA chopper in Kashmir in 2009, possibly a flight carrying mortal remains of Maj Suresh Suri, KC (P) 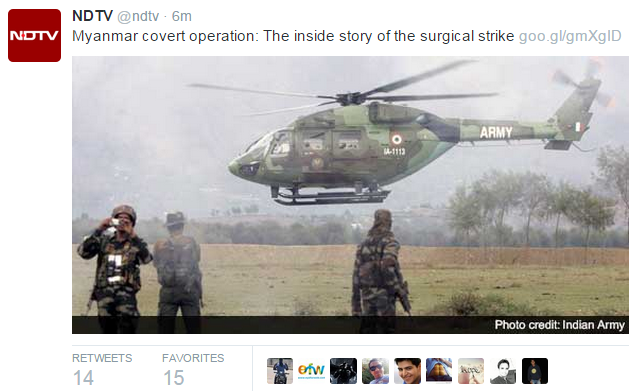 This was tweeted in immediate aftermath of the 2014 General Elections. Coincidentally, this theme was VERY popular among Paki tweeple too! 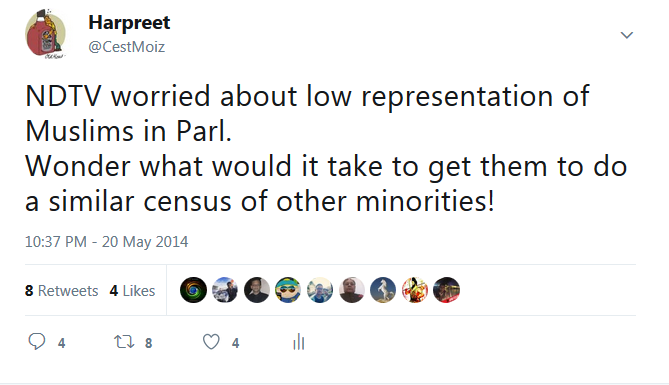 And this one too 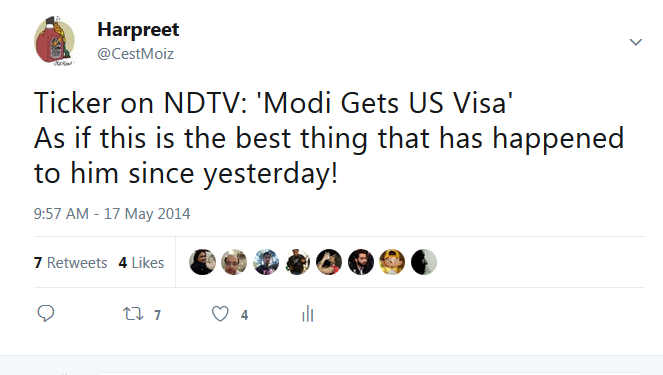 But THIS YouTube Video remains an all time favourite No one can accuse #NDTV of biased reporting. Heck, they question the Supreme Court too! (Do watch. I Insist!)

Of course, the bread and butter – FACTUAL Reporting – too is sometimes up for ‘tempering’ (NOT tampering, mind you), when deemed fit 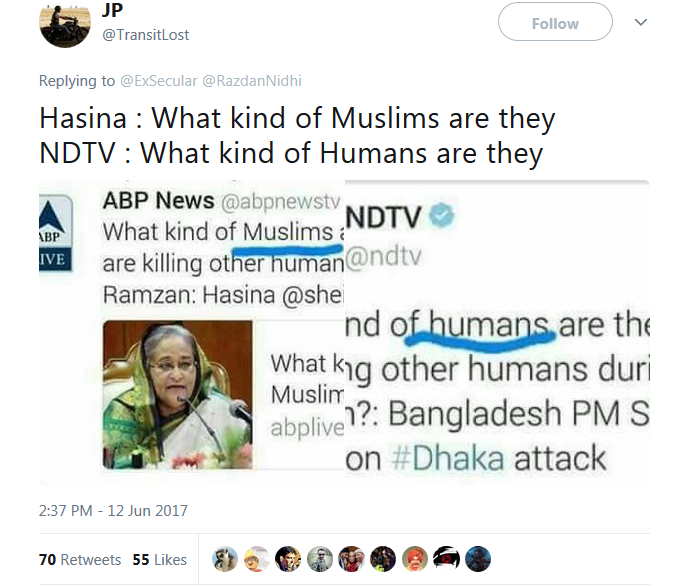 Given the above, can one really blame this handle for tweeting what he did? #NDTV does have a certain ‘reputation’ in some circles 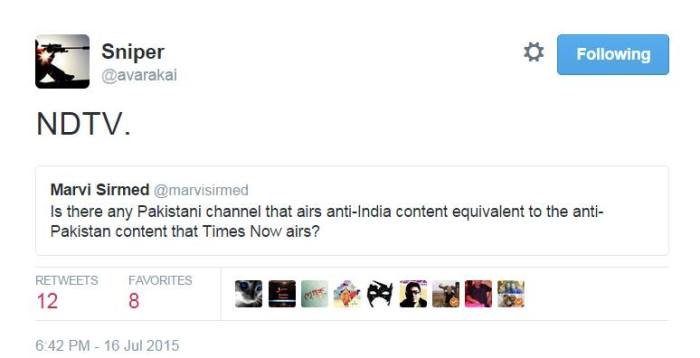 Then they give out IAF plans, even if dated. Info which should never have been released as a matter of propriety. 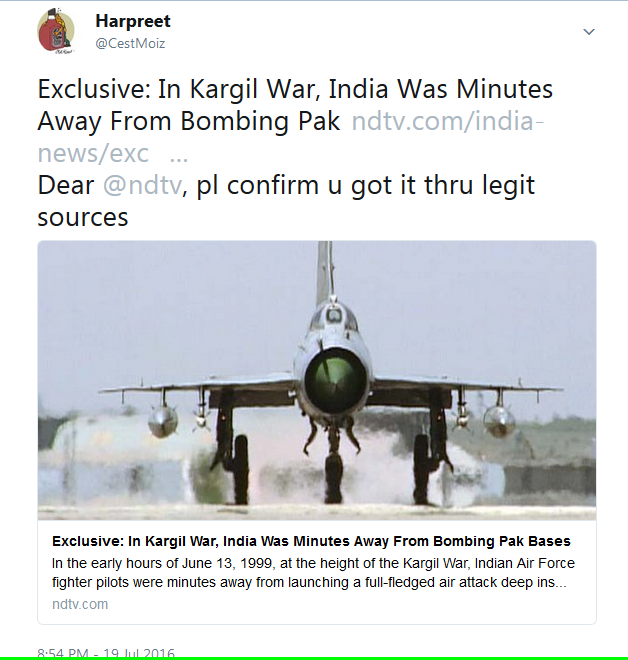 (LINK to above report)

The above was a scoop indeed. A scoop worthy of prosecution under the Official Secrets Act, though

I would definitely want to know how #NDTV came to know what was written in the Squadron Diary. Espionage, anyone?

Sorry, apologies for using the word ‘espionage’ when the correct word is ‘EXCLUSIVE‘ So what if it is IAF war plans we’re talking about 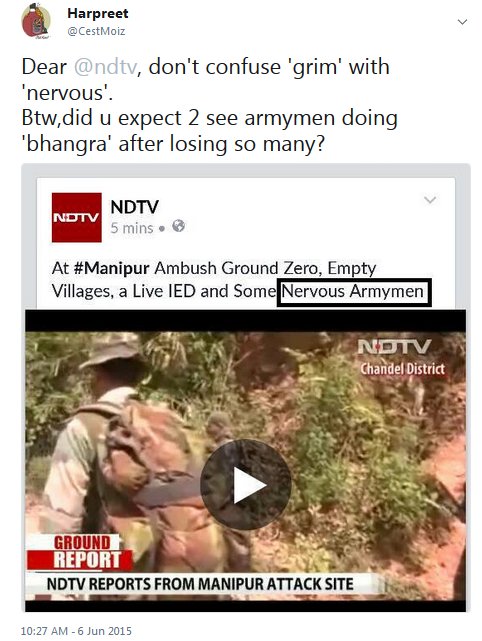 Far too many ‘coincidences’ in terms of ‘editorial oversights’, no? Or is there a method in this ‘madness’? I’ll leave it for you to decide.

Well folks, this is it for the time being, allegedly!