Skip to content
HomeThoughts on the Balakot Strike: Part 1

(This chain of thoughts was tweeted right after the initial reports of the airstrike came by. Sharing it here for archival purposes.)

So I woke up to this news and this tweet by the Brown Pants Propagandu-In-Chief!
(NOT a typo, btw)

Firstly, THE ACKNOWLEDGEMENT! It is big. It means that it was something they simply cannot hide away, unlike the #SurgicalStrikes. It also that gives me great satisfaction, personally. In fact I had tweeted this on the very night of the #PulwamaAttack 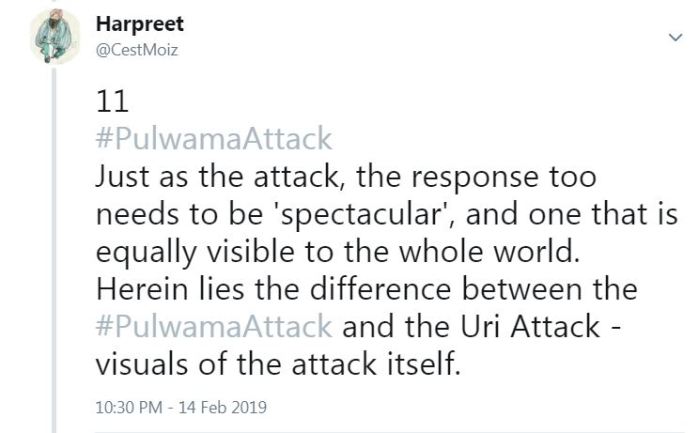 Now, since they cannot simply wish it away, comes the bombastic statement by the Propagandu-in-Chief that IAF couldn’t achieve its mission.

Well, there are two aspects to it – firstly, in this time of Social Media & camera phones, how long before truth emerges?

Secondly, and more importantly, even IF the IAF failed, fact remains that Brown Panted rulers of Pak still confirm that the IAF came visiting

What will they do now?

Especially when they themselves have so pumped up their own population about their invincibility?

A population so brainwashed that it still believes it won the Kargil War and didn’t quite lose in 1971 either. In fact, I did a three part blog series on this. May have a look – State Sponsored Radicalization in Pakistan’s School Curriculum: Part 1 of 3

Point is that such Propagandu (again, NOT a typo) by a losing army, esp one that is the de-facto ruler of the country is in a way, understandable. But when you yourself start believing in it is when things go South and ‘Victory’ of 1965 turns into a thappad of 1971.

This is when the average citizen starts expecting their mighty Brown Pant Warriors to deliver a ‘befitting’ response to the eternal enemy. How dare the Indians even think about attacking the mighty Brown Pants, hainji?

THIS is when such things start trending on Twitter in Pak 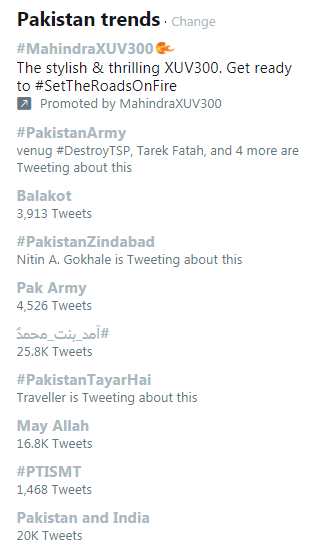 My favourite of the above trends is #PakistanTayarHai.

Indeed, the Paki population is ready!

But what about the Brown Pants?

Why, despite 3-4 hours of the IAF bombing have they not sent their own air force across in retaliation? Weren’t their own aircraft patrolling their own cities to loud, bombastic cheers by their citizens? 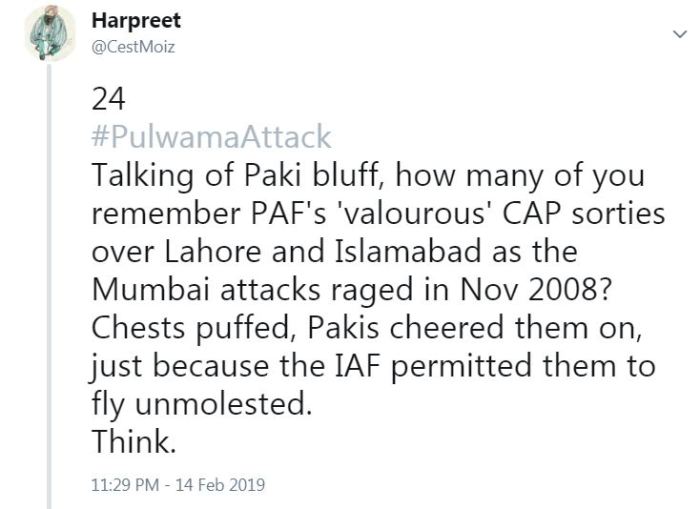 I mean, how far is the Indian border from those cities, hainji?
Or was it the loud noise that empty vessels are so prone to make?

My point is, that India has done what it has done.
And done it in a way that the Brown Pants simply cannot wish away (Just as I had hoped for. Refer second para of this blog).

What it means now is that onus of what happens next is now on the Brown Pants. As I see it, they have two options:

Option 2 – Play it down, pontificate, cry, but do nothing

The very fact that the Propagandu-in-Chief woke up early in the morning to tweet about it means that it is something much bigger that what he makes you believe. What bolsters my argument is that there is complete silence from him since that early morning tweet. The reason possibly is that now they don’t know what to do with it.

Reminds me of a joke about a dog that always runs behind cars, until someone asks him what will he do if he ever manages to catch one!

Additionally, this time the GOI has not only done something big, it has done it in Pakistan, NOT PoK!

The ball is clearly in Pakistan’s court. Airstrikes, that too, this deep in Pakistan send a different message altogether.

Now, by merely striking terror camps and not the regular, uniformed jehadis, GOI has indeed given an avenue to the Brown Pants that a war / further escalation will happen ONLY if the Brown Pants want it.

And that is something I seriously doubt.

With tonnes of dispensable terrorists, a few dozens or 100s of them dead doesn’t matter, esp for an army that refused to accept its own dead in Kargil.

Plus, attacks on terror camps is something which the US itself has been doing in past, albeit with missiles. This is something which bolsters India’s case externally too (Not that it matters). What I now await is the reaction from Jaish. THAT is what will set the tone for what happens next. Esp when photographs emerge.

Ah, so the Propagandu-in-Chief is back online after his morning potty and weekly bath! Going back to photographs that I talked about in the previous tweet, this is the first set released officially by the Brown Pants. 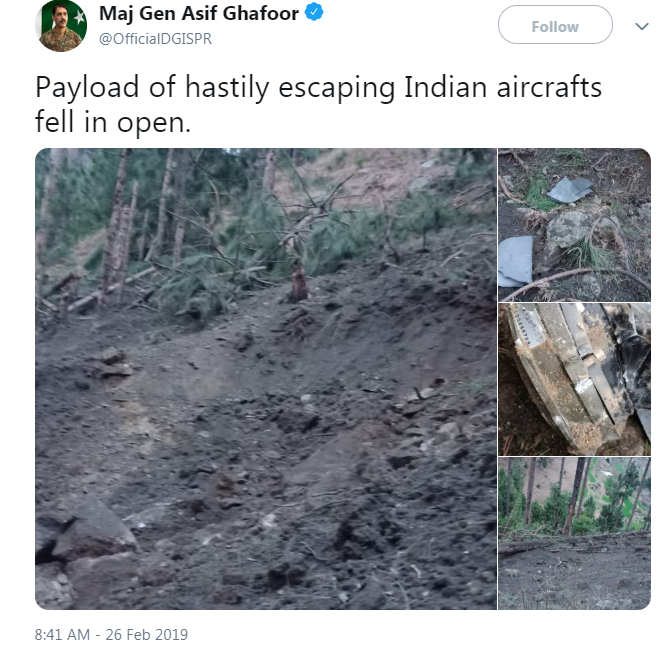 Now will come photographs, including satellite imagery and those taken by the attacking aircraft themselves, that will be released by own side. Plus, photos taken by Pakis themselves in the immediate aftermath must already be circulating on their own WA groups.

Once those come out, the Propagandu-in-Chief will once again come out denying them.

They too will buy the party line – the IAF ran back.

YET, fact remains that the IAF came in and dropped bombs on Paki territory. The mango Paki WILL demand blood, and answers.

Here is how I visualize it panning out, ATLEAST INITIALLY.

They will issue ‘STRONG’ statements and dismiss this ‘attempt’ by IAF. They will try and be the ‘bigger’ power and pontificate about need to keep tempers under control (All that, while the Brown Pants themselves stock up on toilet paper)

Bottomline: They know their bluff has been called. What they need now is moral lectures on why not to escalate.

Bulk of their energies will now be dedicated to managing the opinions within their own country.

And THIS is where the ‘unknown’ lies. Over the coming hours and days, this is what the Brown Pants will be fighting against, not India. Once again, a story about a monkey with his hand caught in a jar of peanuts comes to mind!

Let me wind up this blog post by saying that this day suddenly becomes a lot more ‘interesting’. This is just the beginning, mind you. The events triggered by the #PulwamaAttack have still not been played down fully.

What if they are not able to answer the questions raised by their own countrymen?

Esp if the India side releases photographs of their own and more importantly, Pakis themselves get to see the photos of immediate aftermath clicked by their own jehadi countrymen?

As I said, interesting days ahead! Btw, you might want to google as to why the Paki Navy Chief resigned soon after Kargil War!