Ok folks, carrying on from this Blog yesterday , in light of the events of this day. My thoughts are still a bit unstructured, so pl bear with me.

First and foremost, the point raised in this tweet from nearly four years ago has now been answered. 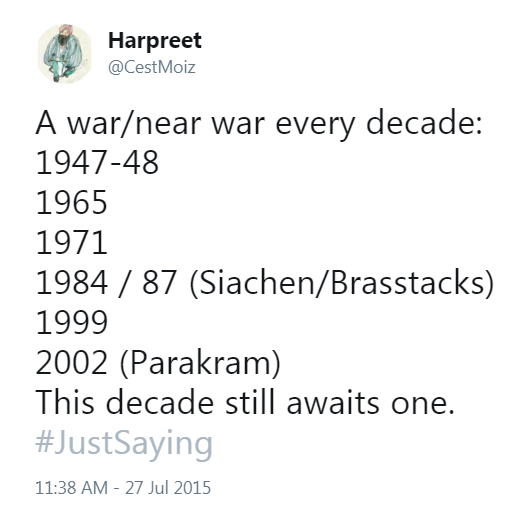 Whether it develops into a war, or a ‘near war’ is to be seen now.

I guess that the Brown Pants have taken a call to retaliate, assuming that the aftermath of an overt retaliation against India will be easier to manage than the yahoos within their own country.

It is a bold gamble they’ve taken.

A gamble indeed, because they assume that India will not dare to climb up the escalatory ladder and instead, calmly take this punch on the chin and back down.

But, personally, I feel that is unlikely. I say this on the basis of the past record of this GOI, right from the Myanmar strike to yesterday’s #Balakot strike. And, to add to that, something which I wrote on the night of the #PulwamaAttack – THE UPCOMING GENERAL ELECTIONS!

In a way, the GOI has already let out its intentions in the official statement some minutes ago. Let me elaborate a bit on that. What was striking in yesterday’s statement in the aftermath of the #Balakot Strike was the pains which the spokesman took to emphasise that it was a NON MILITARY strike. He carefully underlined the fact that no Paki military or civilian targets were engaged.

Now compare that with today’s statement – it STARTS with the fact that the PAF tried to engage military targets.

The symbolism of this should not be missed.

I’ll just leave it at that.

OK, so Imran Khan is on the air right now, saying that they too were taking care not to cause any casualties / collateral damage. But I guess, that has already been preempted by India which has gone on record saying that PAF tried to engage military targets on Indian side.

He talks about miscalculations in wars and tries to take the moral high ground.

Well, I think that boat has sailed now.

Once again, strictly a personal opinion, mind you.

Now coming to the issue of the confirmation by the Indian spokesman that Wing Commander Abhinandan is MIA. With the Pakis confirming, it is safe to assume that he is in their custody.

The question now is, what next?

An IAF pilot in Paki custody is no doubt a liability for India.

I also believe it is also a liability for Pakis themselves, esp since the Brown Pants Propagandu-in-Chief himself has acknowledged it.

Let me spend some time on clarifying that. In case of further escalation, esp with things going south for Pakis, how do you suppose might he be treated?

And now, with a public acknowledgement that he is indeed in their custody, they are bound to release him whenever they do.

Even during Kargil, Flt Lt Nachiketa was returned after 8-10 days. But that was when the Pakis still had the moral upper hand in the war – the Indian Army was still just about getting its act together in early June that summer. This time things aren’t quite the same, though.

There is no Indian land in Paki custody (except for the entire issue of PoK + GB of course). And a bigger retaliation by India is more or less a given IMO.

All I’ll offer is that Wing Commander Abhinandan is in for a few difficult days in the near future, till his repatriation

And this is exactly what makes things difficult for his Paki captors too – to keep him safe and in good health till such time. Of course, they may try and use him as a leverage to DEMAND a de-escalation from India.

The options up ahead vary all the way from de-escalation to a full blown war. If India indeed takes the enemy up on de-escalation, then we can all go home in time for another chilled out weekend. But, if India doesn’t choose to de-escalate, there are a myriad of options.

What happens next will decide whether Pakis can retain their nuke bluff or not. One reason they tried this stunt of earlier today was the difficulty in managing the yahoos within, no doubt.

But another was also that their nuke bluff was under threat.

Well, here’s some breaking news – the nuke bluff is STILL under threat!

Atleast until the GOI makes it clear that they are backing down. And that, IMO, is highly unlikely due to the past reputation of this govt and the upcoming elections.

Now let me talk about why the Pakis chose to cry themselves hoarse yesterday that the IAF only struck the Balakot in PoK and not in KPK. In addition, today too, they chose to confine themselves to a cross LoC raid, and not across the IB.

The question is, WHY??

I’d say it is for two reasons – Firstly the cover afforded to ingressing aircraft by the hilly landscape.

Secondly, and more importantly, the vain hope of keeping any further escalation localized.

Remember, this is how the 1965 war too began – A delusional Ayub Khan choosing Chhamb-Jaurian for his attack and then crying foul when the Indian Army came knocking on the very gates of Lahore!

Oh, btw, that was also the reason Ayub Khan lost his job soon after his ‘victory’. Coming back to the LoC, an escalation limited to that might be a bit more palatable to the international community, no doubt.

But it has other implications as well.

With a huge disparity in conventional military forces, India will be able to do what it did in the 1965 war – a threat in being for opening up other parts of the IB, even as it maintains pressure on the LoC by concentrating critical military resources out there.

Pakis may have been too clever by half in their cross LoC ‘adventure’ of this morning, but I’m sure they must be working the phone lines furiously, begging the rest of the world to hold India back. Personally I doubt that is gonna happen.

They are once again like a dog who keeps chasing after cars, until one day he actually catches one!

To add to their woes, I doubt they’d ever have gamed getting a PoW.

Yup, I’d call him a PoW, because that is what this is – WAR.

A war that commenced on 22 Oct 1947 when Paki hordes came calling at the gates of Muzaffarabad.

A war that has still not ended, with the current situation merely being another battle as part of it.

Btw here’s something I just realized – After every such battle in this war, the Pakis lose their ruler.

Do you folks see a pattern too?

Bottomline – Pakis (and by that I mean the Brown Panted Ones – their Army) are caught in a downward spiral with no control over the escalation ladder – somewhat akin to a monkey with his hand caught in a jar of peanuts.

When they could have quietly stuck to their Propagandu of no damage and IAF turned back, they chose to do what they did.

Now the ball is back in India’s court.

And this is where the current GOI has quite a ‘reputation’, to put it that way.

Wing Commander Abhinandan will be back home, no doubt, but a lot of water would have flown in the Chenab and the Jhelum before he does. Of course, he will also figure quite prominently in the political discourse within India too, as we too head towards our own elections.

In the end, I’ll say that we better be prepared for more military to military ‘interactions’ between the IA and the PA alongwith the other two services.

Talking about the other two services, not many would be aware that the Paki Naval Chief actually had to resign after Kargil!

For those who didn’t know, it was due to the Indian Navy. Here is what happened at the high seas that summer – Link

Oh, btw, another interesting thing no one is talking about is the fact that it was an IAF MiG 21 that brought down the much celebrated F-16 of the PAF!

To conclude, let me just say that before the year is out, there will be some very visible changes in top leadership in Pakistan.

One thought on “Thoughts on Balakot Strike: Part II – The Pakistani Response”