So folks, earlier this week was the anniversary of the ceasefire of the 1965 war – a war that Pakis chest-thumpingly claim to have ‘decisively’ won. Well, like all Paki claims, this one too needs to be taken with a tonne of salt. Let me share some thoughts on it ..

First, a bit of background.

1960s were a ‘glorious’ time for Pakistan. Their economy was ‘booming’, their first (of many) IMF bailouts of 1958 notwithstanding! To be fair, they were most definitely doing relatively better than us, though.

And then, there was the glorious, self styled Field Marshal sitting comfortably in the President’s chair, having imposed the first (of many) military rules over the land of the pure! And he was being feted by no less than President Kennedy of the mighty US of A!

Then there was the Soviet bogey that had led to Pakis’ entry into the Baghdad Pact, later CENTO and all the shining military hardware that came as bakhsheesh with it, not to mention the Mutual Defence Assistance Act of 1954.

To their East was their eternal enemy – broken and humiliated in the aftermath of the 1962 war, followed by the demise of Nehru. His successor, Shastri, was a physically diminutive man who was easily dismissed by the tall and imposing Ayub Khan as a weakling.

To be a Paki at that moment in history was .. well .. good, esp in the eyes of Pakis!

‘Hindu morale’ was ‘low’, you see! If only they knew how wrong they were!

Unsurprisingly, Ayub soon felt a familiar ‘itch’ in his nether regions! All those shining toys, and a broken enemy!

Kashmir was his for the taking!

He would be more than just a self styled field marshal – he would be the next Qaid – The one who won Kashmir!

Heck, Pakis had even made songs about that! So what if the said songs were lifted nearly word for word from a Bollywood song, even before the term ‘Bollywood’ had been coined! (Just watch this video from the 3 min mark!)

So in he went! Paki Pattons soon came visiting Kutch in April 1965, followed by infantry assaults to enforce their ‘claim’ on Indian lands!

Well, Pakis soon went back under international pressure, smug in their belief that the measured Indian reaction was actually Indian weakness!

Kashmir was but a matter of weeks away!

But true to Brown Pants’ ‘martial’ reputation, they sent in ‘volunteers’ in civvies to ‘liberate’ Kashmir, aka 1947. They even gave it a glamourous name – Operation Gibraltar!

Too bad that the Kashmiris failed to ‘rise up’ as anticipated.

To add insult to injury, Kashmiris actually helped the Indian forces round up their ‘liberators’. In the process, the Indian army even captured the Haji Pir Pass!

Shaken up, he unleashed his Pattons and Sabres to retake Kashmir in an area where Pakistan enjoys geographical advantage – Chhamb! This time he named it Operation Grand Slam!

The Paki attack was on the verge of success, stubborn Indian defences notwithstanding.

And then the Paki attack suddenly halted. You see, Ayub realised that the general enroute to perhaps the most glorious victory was an Ahmediyya – Maj Gen Akhtar Hussain Malik! There was no way an Ahmediyya could be credited with winning Kashmir. No Sir!

So out went Akhtar Hussain Malik and in came Yahya Khan.

The second name rings a bell, doesn’t it?!

Well, the one day lost in this ‘reorganisation’ gave just enough time to India to reinforce its defences. Akhnoor was now out of Pakis’ reach.

This was the end of his Grand Slam!

Yet, the pressure was still considerable.

There was only one way to relieve it – open up another front across the IB.

Predictably, the Pakis reeled back from Chhamb to reinforce these sectors.

To this day, you will find Pakis ‘upset’ at this ‘betrayal’ by India for opening new fronts across the IB in Punjab and denying Pakis a victory in Kashmir!

I kid you not!

The biggest tank battles and infantry assaults since WW2 were on!

t was here that the Pakis played a masterstroke – they brought out a whole Armoured Division that Indians had no idea existed. It reached all the way to Khem Karan / Asal Uttar.

It was here that they all met their maker – at the hands of men like Abdul Hamid and Salim Caleb.

In the meantime, Lt Col Tarapore and thousands like him earned immortal fame scores of kilometres deep in Chawinda and thereabouts.

In the air too, the much celebrated Sabre Jets of the PAF had more than met their match in the IAF Gnats. Heck, a Mystere flown by Sqn Ldr Devayya even brought down a Starfighter.

So much for the PAF too!

Oh, talking about the PAF, there was the ‘fantastical’ claim of Shri MM Alam shooting down FIVE IAF Hunters – all of them within 28 seconds!

Well, whatever makes them happy!

Of course, PAF never released ANY gun camera footage of the epic sortie!

As the war dragged on, Pakis running low on ammo were looking for an ‘honoourable’ way out. It soon came in the form of a ceasefire brokered by the powers that be.

Too bad that Kashmir still wasn’t in his hands.

Too bad that Haji Pir was still in Indian hands.

Too bad that Indian tanks were way deep into Pakistani territory.

Too bad that his much vaunted ‘surprise’ armoured div lay in tatters at Khem Karan / Asal Uttar.

Atleast he had won!

Heck, there even were Roohani Taaqats helping the Pakistani soldiers on the battlefield.

Once again, I kid you not! Here’s proof! 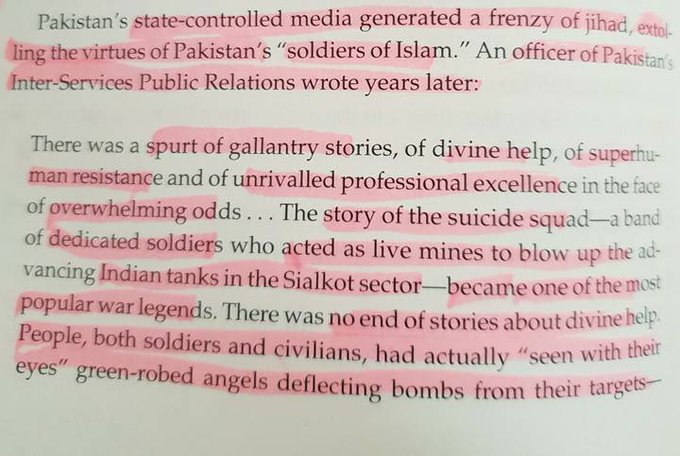 Take that, you Indians!

Well, be my guests!

May you ‘win’ more such victories that end up in the loss of half your country merely six years later, like it happened in 1971! Hindu Morale had withstood all those shiny new Pattons & Starfighters!

1965 was, for Indian armed forces as well as the Indian Nation, a watershed. Especially in the aftermath of the 1962 disaster. The steps reorganising and re-equipping the defence forces initiated from 1963 onwards finally bore fruit.

Yes there were weak moments – like the one that befell the GOC 15 Div who actually proposed withdrawal to the East of Beas.

Thankfully, there were stronger willed men like General Harbaksh Singh who ensured such suggestions were nipped in the bud.

Herein also lay a crucial difference between Indian and Pakistani triggers for changing military leaders in the middle of war, While Pakis removed a general on the verge of victory, India removed one who was suggesting a withdrawal!

In 1965, the Indian Army celebrated 50 years of the war in a befitting manner.
I too did my bit by tweeting a thread, much more detailed than this one.
Here is the LINK to the first tweet of that thread.

Worth a read, I’d say; rather I INSIST!

In the end, I’ll just leave a link to THIS photo thread here to cap this thread.