Folks, sharing some thoughts on how the events post the abrogation of Article 370 in J&K have shaped up thus far.

Thoughts are still unstructured. Let’s see how it goes ..

I had share some thoughts some two weeks ago vide THIS blog post. Current chain of thoughts carries on from here. There might be some repetitions, plz pardon that!

One thing is crystal clear- there seems to be no end to the rabble rousing rhetoric from Paki side The crowning glory came just last Friday, with the Beggar-in-Chief giving away his intentions in advance by sounding out his bhookha nanga masses to cross the LoC ‘on his signal’!

I’ll come to that in a while.

There are other things to be discussed before that. Social Media has been abuzz lately with one ‘prominent’ Paki after another letting out one verbal fart after another, led all the way by the Propagandu-in-Chief himself. (Do visit his twitter handle, btw!)

Now before someone comes after me for not mentioning the Beggar-in-Chief Kaptaan Imran Saheb, let me ask you to read the previous paragraph again!

Ghafoor is the one leading the campaign. Have no doubts about it!

In any case, ‘Kaptaan’ is far far lower in the pecking order when compared to a General, and that too when the said General is Shri Propagandu-in-Chief himself!

But this begets another question – Why in the world are they so hell bent on making such fools of themselves, hainji?

There could be two reasons for this. Either they REALLY think that they can get Kashmir this time round.

They are trying to prevent their masses from asking other, more ‘pressing’ question. Questions regarding the shit-hole that their country is rapidly becoming.

A rational person would gravitate towards assuming it is the second reason why they keep shouting ‘Hai Kashmir Le Gaya Modi’!

But then, no one ever accused Paki Fauj of being rational, no?

Well, as rational people, let us analyze the second reason for a while!

Current state of Pakistan would put any thinking person into a coma. Economy is down in the dumps, rupee just out of a free-fall but can get into another one anytime, forex reserves running into negative 12Bn dollars DESPITE 14Bn dollars of loans .. You get my drift, right?

Then there are the yahoos who form the bulk of their populace – throwing spanners in all plans of their military masters, latest being the recent destruction of the Hindu temple in Ghotki at a time when their own ‘leaders’ are crying themselves hoarse over Indian minorities!

And then is the small issue of Afghanistan. Hmmm .. yet another superpower that was very nearly on the verge of ‘defeat’ at the hands of the great Paki Brown Pants suddenly announced a change in plans regarding moving out of Afghanistan!

The announcement by Shri Donald was nothing short of a KLPD for the brown pants. Not only had the superpower refused to grant the much awaited victory to the brown pants, but it had also complicated their plans of diverting taliban cannon fodder into Kashmir.

THIS was a major problem, one that has never been publicly acknowledged, though.

And then, Shri Osama bin Laden’s son was dispatched by the US where else, but inside Pakistan itself, just like his martyred father!

This is not a very good time to be a Paki, I tell you!

So they keep doing what they do best – Shouting at the top of their voices in front of their audiences of yahoos, tweeting away to glory about Bad Bad India, getting paid articles in ‘respectable’ western media outlets and such likes.

Oh, talking about paid articles, even the Beggar-in-Chief himself wrote an entire op-ed in the NYT recently!

To his credit, he wrote all of it himself!

No one in this world has time for this beggar of a nation!

Heck, even as the Beggar-in-Chief kept crying ‘Hai Hai Modi Kashmir Le Gaya’, Trump announced he will be sharing a stage with Modi!

And .. behind the scenes .. they dispatched a team to Bangkok some days ago.

No, you dirty minded ones, it was not the ‘usual’ itinerary this time! This time, they had to make time from their ‘busy Bangkok schedules’ to prostrate themselves before the FATF folks!

Guess the rod was in the other hand this time!

Btw, there is already another Paki team in New York to once again beg the FATF not to put them on the black list!

Ironically, just staying on the grey list will be touted as a HUGE victory, IF they don’t get blacklisted!

But .. the Paki awam is happy standing up every Friday for 30 minutes in order to show their ‘bhaichara’ for their Kashmiri ‘brethren’! Oh wait, they didn’t do it last Friday, no?

Something tells me that this ‘Pakistaniyon, Khade ho jao’ tamasha too will cease soon, just like the ‘We will go to the ICJ’ nonsense suddenly stopped when they realized that they cannot go to the ICJ!

But then, why keep shouting nonsense when you yourself know it is no good?

Well, because once they stop shouting, their own yahoos will start asking what did all this achieve. I kid you not! Heck, the hashtag #GetLostTraitorNiazi is already doing rounds on Paki twitterscape!

Who is Niazi, you asked?

There was an AAK Niazi who lost East Pakistan in 1971, and now here is an IAK Niazi who is already being accused of having lost Kashmir in 2019!

And you think he will stop crying himself hoarse?

The brown pants have played this round quite well once again, but only just!

Because they have virtually destroyed all semblance of opposition to Shri Niazi’s PTI!

The only choice I see left once Niazi is let go, is Shah Mahmood Qureshi, with his huge ego and all that! On that note, I will just leave this screenshot here! 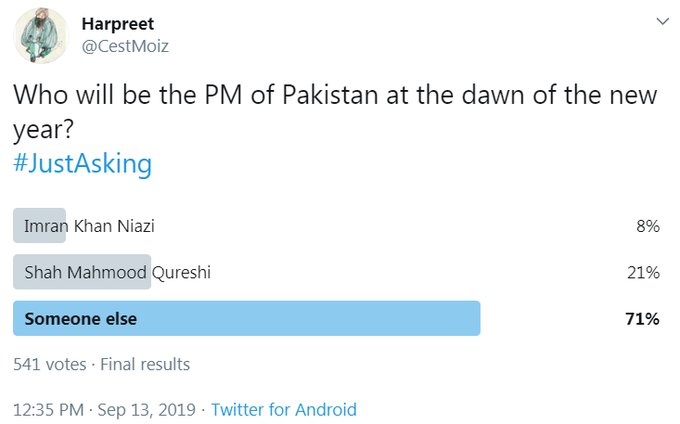 Now, in order to save his own Prime Ministership, selected or not, Imran Bhai has promised to YET AGAIN ‘internationalize’ the Kashmir issue – this time at the UNGA later this month.

Like I said before, he has to keep running, merely to stand still!

And all this, when PM Modi has not uttered the word ‘Pakistan’ even once in the past few months!
But what happens after the UNGA rudaali by Beggar-in-Chief?
Will India give Kashmir to Pak?
Or atleast restore Article 370?

Well, it happens every night – in their (wet) dreams!

But jokes apart, what happens after the UNGA is the FATF decision. That is expected in Oct or Nov.

THIS, folks, is the thing to wait for.

On that note, let me offer you a conspiracy theory. This recent increase of import duty on Malaysian refined palm oil is atleast partially attributable to the fact that Malaysia continues to support Pakistan in FATF, along with China and Turkey.

Oct onwards, I foresee the clamour for ‘Teaching India ANOTHER Lesson’ only growing inside Pakistan.

Why ‘another’ lesson, you ask?

Well, because they have already ‘taught’ us a lesson by deliberately missing military targets even after using PGMs on 27 Feb, then shooting down a MiG 21 and also a Su-30 that same day, while NOT losing their two seater F-16!

Take that, you Indians!

And then just to taunt India – they gave a higher award to the pilot who shot down the MiG 21 than to the one who supposedly killed the Su-30!

Oh, and the memorial to commemorate the ‘great victory’ of 27 Feb also has the graves of the two F-16 Pilots who did not die that day at the hands of #AbhinandanVarthaman!

Now tell me what will they say when their yahoos ask why haven’t they already got Kashmir back, hainji?

THIS is where this blatant propagandu warfare will come back to haunt them. They will simply HAVE to show some action, even if merely to placate their bloodthirsty yahoos. And knowing this GOI, they know that Indian #SwiftRetort WILL come and won’t be hot air like theirs was!

The only other option with the Brown Pants is making Imran the fall guy, just like they did to Nawaz Sharif some two decades ago!

Now you know why Imran is so worked up!

His days are numbered.

This war mongering from Pakis of all hues will continue. I doubt there is any other country where the head of the govt himself threatens nuclear war atleast twice a day and thrice at night!

But do brace yourselves for yet another act of self destructive lunacy that they will bring upon themselves, and us, aka 1965, 1971, 1999.

That’s it for the time being. Do remember we are in the midst of the 54th anniversary of 1965 war this month.