Skip to content
HomePeople’s Liberation Army – A History of ‘Valour’

Blogged about the Myths of PLA some days ago (Link). Now continuing from there.

Huge parades, shiny ‘toys’, rows and rows of it. The President, or as he would like to be addressed – The Chairman, inspecting the troops in an open jeep with FOUR mikes, exhorting them to be loyal to him (Yes, apparently the PLA needs to be reminded of it’s obligation to be loyal to the CPC over and over again!). A shiny new aircraft carrier with beautiful introductory videos that would put Top Gun to shame. Or was it the other way round (LINK : China copied not only the music, but also the choreography of Top Gun)?

Then there was the ‘small’ issue of an officially released video of their BESTEST fighter jet, which ‘unfortunately’ was found to be a video from the same ‘Top Gun’ instead! (LINK: China red-faced after footage of new fighter ‘was from Top Gun’)

The PLA, PLAAF and PLAN are the future of warfare, as the People’s Republic of China would like us to believe. Well, there’s only one way to find out the amount of truth in this ‘fact’ – and given the sabre rattling happening on the other side of the LAC (or is it empty vessels. Let’s leave that for later), it might not be too far in the future.

But one thing that we CAN, and in fact MUST analyse is how the PLA has measured up when time has come to live up to their bombast. And there is plenty to talk about, given their ‘rich’ history of ‘valour’ too. Let us start with the PLA before the establishment of the PRC. They were actually raised as the armed wing of the Chinese Communist Party, and continue to be so even today. Yes, China, the country doesn’t have an army. What they have is the ARMED WING OF THE CPC, enabling the CPC in ruling over China.

The PLA was raised in 1928 to help the CPC ‘struggle’ in its endeavour to establish a communist regime in China. Since almost its very inception, it found itself fighting Chiang Kai Shek’s Koumintang for the right to rule over China. This fight was, however interrupted when the Japanese showed up from across the East China Sea. This is where Mao played a masterstroke – he withdrew from the fight, preferring to let the Koumintang fight the Japanese instead. The same template carried on during the second world war too. So basically, the PLA did NOTHING for the freedom of China when occupied by the Japanese. On the contrary, as soon as the Japanese were defeated with the combined efforts of the Allies and the Koumintang, the PLA attacked a weakened Chiang Kai Shek and drove him to Taiwan.

PRC established, the PLA soon marched into Tibet. There was NO resistance worth the name. Tick first ‘victory’ for the PLA. Fast forward three more years. Gen Eisenhower marched into North Korea, threatening to reach the very doorstep of the PRC on the Yalu River. Mao committed the PLA to ensure the survival of the commie regime. The Americans were ultimately driven back to the 32nd Parallel, where they continue to be even today. This campaign was touted as a stunning victory for the PLA. But was is really a victory? Dig a bit deeper and what does one find? Waves after waves of PLA soldiers sent in to simply overwhelm the Americans by sheer numbers. No tactics. No manoeuvres. Nothing. Just keep sending them till the Americans run out of bullets to shoot them. Very smart, Mr Mao! I will let you google for the fatalities that the PLA as compared to those suffered by the Americans. It was a ‘victory’ indeed, or was it? Total lack of ingenuity. Just one resource that Mao had at his disposal aplenty – scores and scores of poor Chinese soldiers. 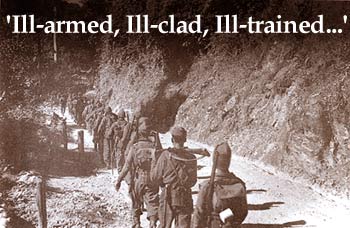 Less than a decade later came the 1962 war. Enough has been written about it. But still, I’ll add my own bit. As the Time Magazine wrote – ill armed, ill clad, ill trained, the only thing that the Indian Army didn’t lack was guts. The Indian army was thrust in a battle it was not prepared for. Couple that with questionable leadership and the result did NOT come as a surprise. BUT, one fact that is often left out is that wherever the local commanders did not panic, and actually LED their troops, the Indian soldier stood like a rock on his land. Till his very last breath. Names like Dhan Singh Thapa, Shaitan Singh, Jaswant Singh, Joginder Singh, Yog Raj Palta, Brahmanand Awasthi and the hundreds more became folklore.  A beautiful tribute to the Indian warriors who held on to Kibithu / Walong to their last breath appeared in the Pune Newsline on 07 Nov 1999. I still retain the original paper cutting. A must read piece.

The Chinese admit to fewer than 750 casualties in that war. Let us analyse that a bit. 750 casualties. Let that sink in for a moment! Here is how the Chinese fought. They got a peasants’ army to march from the plains of East / South China into the high Himalayas in September / October. That done, they told them to attack. Uphill, against a stubborn enemy. At altitudes ranging from 12 to 18,000 feet. Across a theatre ranging from Ladakh to Kibithu. And then, with the plains of Assam in sight, they called for a ceasefire and withdrew!. Back up the hills from where they’d just climbed down. Back into the icy Tibet. In the peak of winters. And less than 750 casualties? The souls of Maj Shaitan Singh and his Ahirs would be laughing their heads off .. they would have accounted for a tad more than that figure at Rezang La itself! Another ‘victory’, but at what cost once again? And what did they achieve? No new lands came their way. On the contrary, they made an eternal enemy of a large neighbour. One that has given them considerable grief on the battlefield subsequently.

Talking of grief on the LAC, the first instance came soon after 1962, at NathuLa in 1967 when Brigadier Sagat Singh ensured that his Grenadiers killed 300+ Chinese in response to they wounding their commanding officer. Soon thereafter came the incident at Chola, again in Sikkim, less than a month later wherein the Gorkhas of 7/11 GR did a repeat of that. And guess what, Sikkim has been so peaceful since then!

Two years later came the faceoff between the PLA and the Soviets at Usuri River. Close to 1000 PLA troops were accounted for by the Soviets. So alarmed was Mao that he almost vacated Peking!

Fast forward to a decade ahead. This time it was Shri Deng Xiaoping who thought he should ‘teach a lesson’ to puny Vietnam for opposing the China backed murderous Cambodian regime. He launched the much vaunted PLA to teach the said lesson to Vietnam. But no points for guessing who got taught the lesson! The PLA lost close to 200,000 soldiers, claimed a victory and moved back. Very smart of them. Just that the Vietnamese tend to disagree, though! 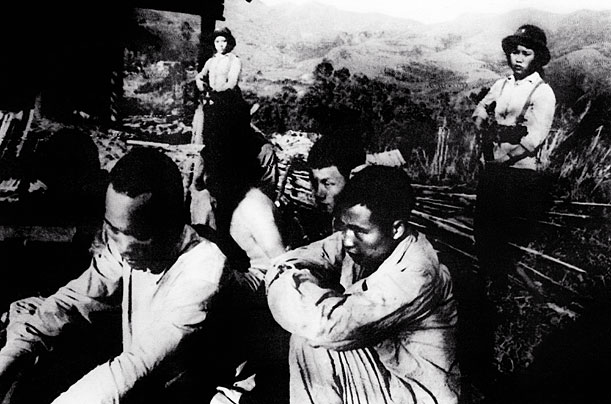 Next decade came another standoff with India at Sumdorong Chu. Interestingly, Wikipedia has got it in good detail. Bottomline, the PLA tried to pre-emptively occupy some areas on the LAC in Arunachal Pradesh, but got the shock of their lives when the Indian army counter mobilised with an entire brigade! Thing is, the Chinese thought that this time too, the ghost of 1962 would prevent India from responding to them. But I guess they forgot that the ghost of 1962 was more than exorcised in 1967 itself. Something similar, in fact, happened at Dolam a few months ago, a standoff which carries on still. If only the PLA could learn from THEIR OWN FCUKING HISTORY!

Then there was the ‘little’ incident in South Sudan some months ago, something that I blogged about earlier too (link at the top of this blog post), when the shiny toys failed to ‘persuade’ the PLA soldiers to hang on instead of running away in face of rag tag militias.

At the end of it, I stand firm in my belief that the PLA is all huff and puff, but no WILL to prove that it is not mere bluster. Despite the shiny toys, the Chinese Emperor’s Army is Naked! I guess they know it too, ‘coz their aim seems to be to somehow win without fighting. And they just might succeed in doing so, atleast in the South – China, nay Indo – China Sea as it has historically been called. But they ran into a stone wall in Dolam, hoping for the same template to get repeated.

One thought on “People’s Liberation Army – A History of ‘Valour’”