Skip to content
HomeThoughts on the Balakot Strike: Part III – The Tri-Services Presser in New Delhi

Ok folks, here is my reading of this evening’s tri-services press conference. Once again, I’ll be doing this blog on the go, so the chain of thoughts might seem a bit disjointed. Pl bear with me!

Firstly, regarding the change of time from 5pm to 7pm. I think it is fair to assume that it was precipitated by the Pakis’ decision to release Wing Commander Abhinandan. In fact, that announcement came less than an hour after I too speculated the same. 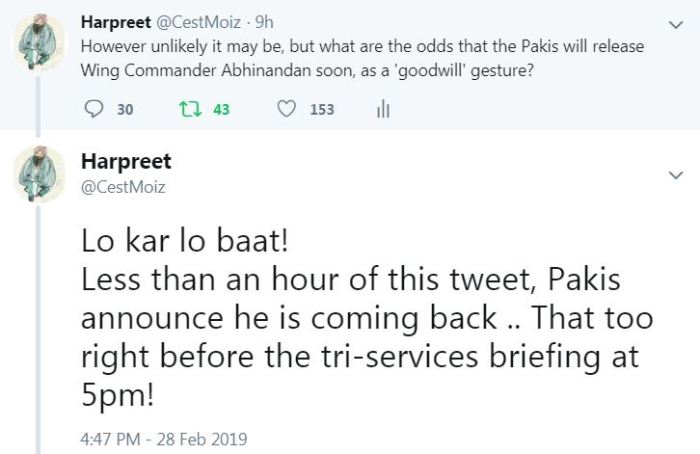 The announcement by the Pakistani Beggar-in-Chief Shri Imran Khan was, unsurprisingly, accompanied by a lot of pontification and sermonizing by the still rattled Pakis attempting to take the moral high ground!

Pakis were happy that they have the upper hand by the way of Wing Commander Abhinandan, no doubt.

Yet, behind all that bravado lurked a real fear – that of the Indian ultimatum that the PoW be returned unharmed and unconditionally.

They were, of course, sorely disappointed by the GOI’s stand.

Heck, even their ‘own’ within Indian borders failed to recreate the IC-814 hysteria that they would no doubt, have hoped for. Yet, they floated trial balloons such as this one. 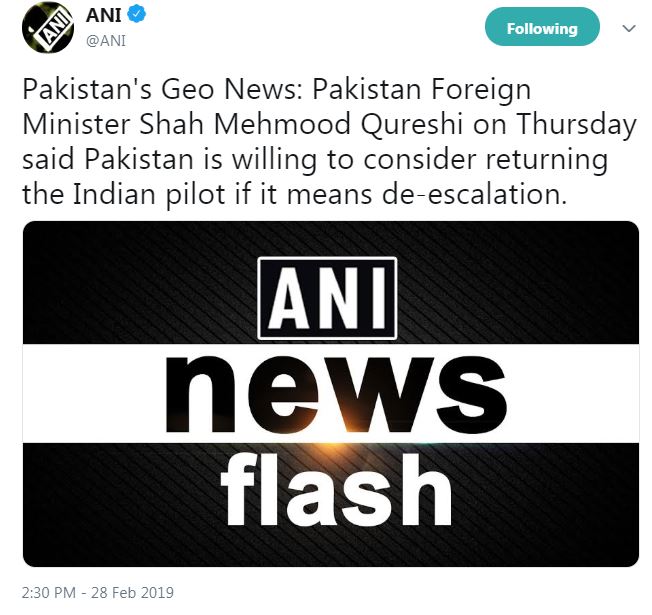 And something tells me that the originally planned presser at 5pm (IIRC, it was supposed to be without any Q and A, but I may be wrong on that account) might just have been to tell the Pakis that their time was up, and things were moving on to the next stage. I may be wrong on the above statement, but I do feel it is a valid hypothesis, esp in this environment of info overload!

What bolsters my conspiracy theory is that Pakis announced his release just about half an hour before the presser and that the presser itself was postponed.

Okay, so enough about conspiracy theories!

Let me get to the presser itself.

A two hour delay meant that my evening suddenly opened up just in time for a short run!

Jokes apart, the presser itself was crisp and to the point.

Like all of us over here, I am sure the Brown Panted ones on the Paki side too would have been watching it with keen interest – would India accept their ‘peace offering’ in the form of repatriation of the PoW or not!

I think within the first thirty seconds, they would have realized this wouldn’t be the case!

The IAF representative not only pulled their brown pants down, exposing them in front of all that were tuned in, he then proceeded to spank their bare, unwashed bums too!

He not only reiterated GOI’s stand of yesterday that PAF was actually seeking to bomb military targets in response to the terror infrastructure engaged by IAF, but he also said that the much hyped Paki ‘Fizzle-ya’ failed to do so, even a mere kilometer or so across the LoC!

Having thus de-panted the Brown Pants and then spanked them, he proceeded a step further to put it OFFICIALLY on record that the Pakis had not only failed in their mission, but also lost a much cherished and worshipped F-16, and that too, to an IAF MiG 21 ‘Bison’!

Of course, it all begun he calling them out for the liars that they are – claiming two aircraft downed and three pilots captured, to merely one aircraft and one pilot!

Then, with a deadpan expression and delivery, he very ‘cheekily’ let out that the second aircraft and the two pilots that Pakis were talking about were actually their own!

Of course, to further ensure that by the time the presser ends, Pakis won’t be asking questions of the IAF but their own rulers, he later showed the debris of the AMRAAM recovered near the engagement area as well! 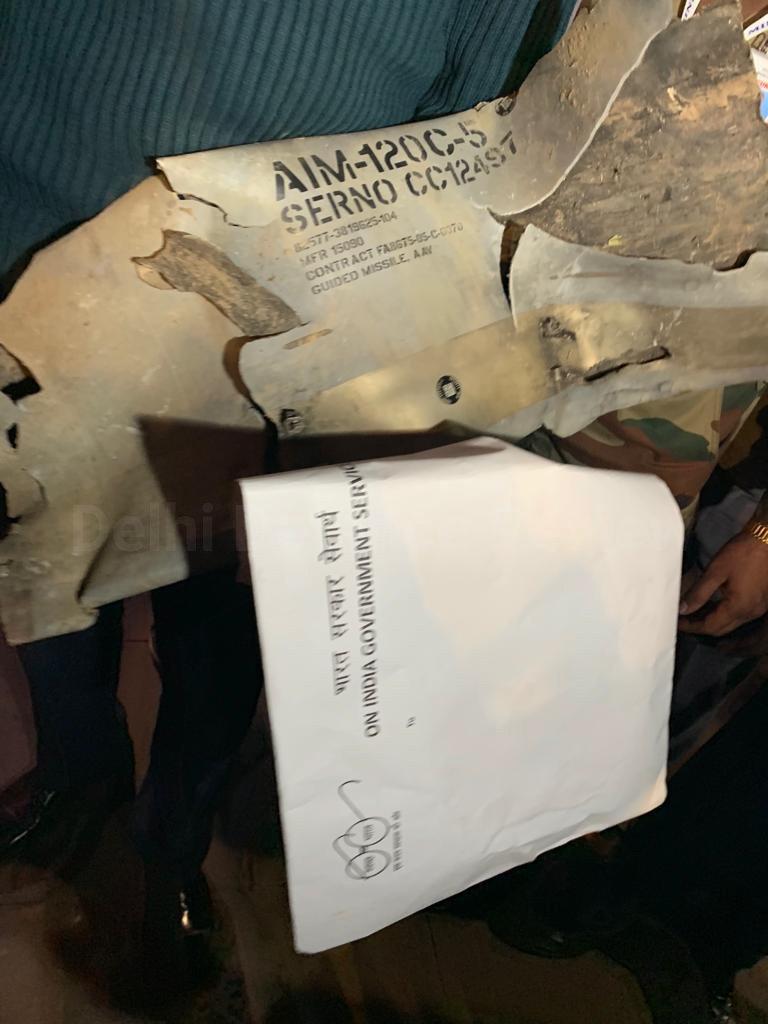 (Photo from TL of @delhidefence)

Thus, within the span of less than five minutes that he spoke, he had taught a very important lesson in Info Warfare to the Brown Pants and their Propagandu-in-Chief!

To think that they can still get away with such 1971 like antics in this day and age, is plain IDIOTIC! 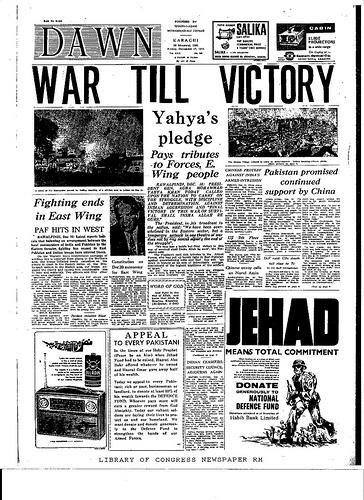 Even 32 hrs after losing an F-16 and possibly one of the two pilots flying it, they had STILL not officially acknowledged it to their own population. And they thought they could keep their brainwashed yahoos blissfully unaware!

Well, an Air Marshal in Delhi put paid to that!

Had they admitted their loss yesterday itself, then this night they would have had some more time to actually think about how to plan for the days ahead. Instead, they will now be busy dismissing the Indian statement!

Suits me fine, to be very frank!

Once the good Air Marshal was done de-panting & then spanking them (Btw, I hereby proclaim copyright on ‘de-panting’ :D), he made way for the Indian Army representative.

The good general spoke for barely a couple of minutes, since much ‘glamour’ had been stolen by the PAF & IAF.

But then there were two phrases which he used that I am sure, would have made Paki Army proud to have stuck with brown pants as their official uniform!

He mentioned that the IA was ready on the LoC AND THE IB!

And then, to thumb his nose at Shri Bajwa, he very matter-of-factly put in a word about IA’s mechanised formations being put on standby!

In a gesture of extreme benevolence to the enemy, he took extreme care NOT to use the words ‘Cold’ and ‘Start’ at all in his statement!

As the good General stepped aside after brutalizing the Brown Pants, in came the Khalsa of Gobind, proudly attired in his navy uniform. And then, true to the reputation of the Navy as the silent service, he read out a statement that was barely one paragraph long! 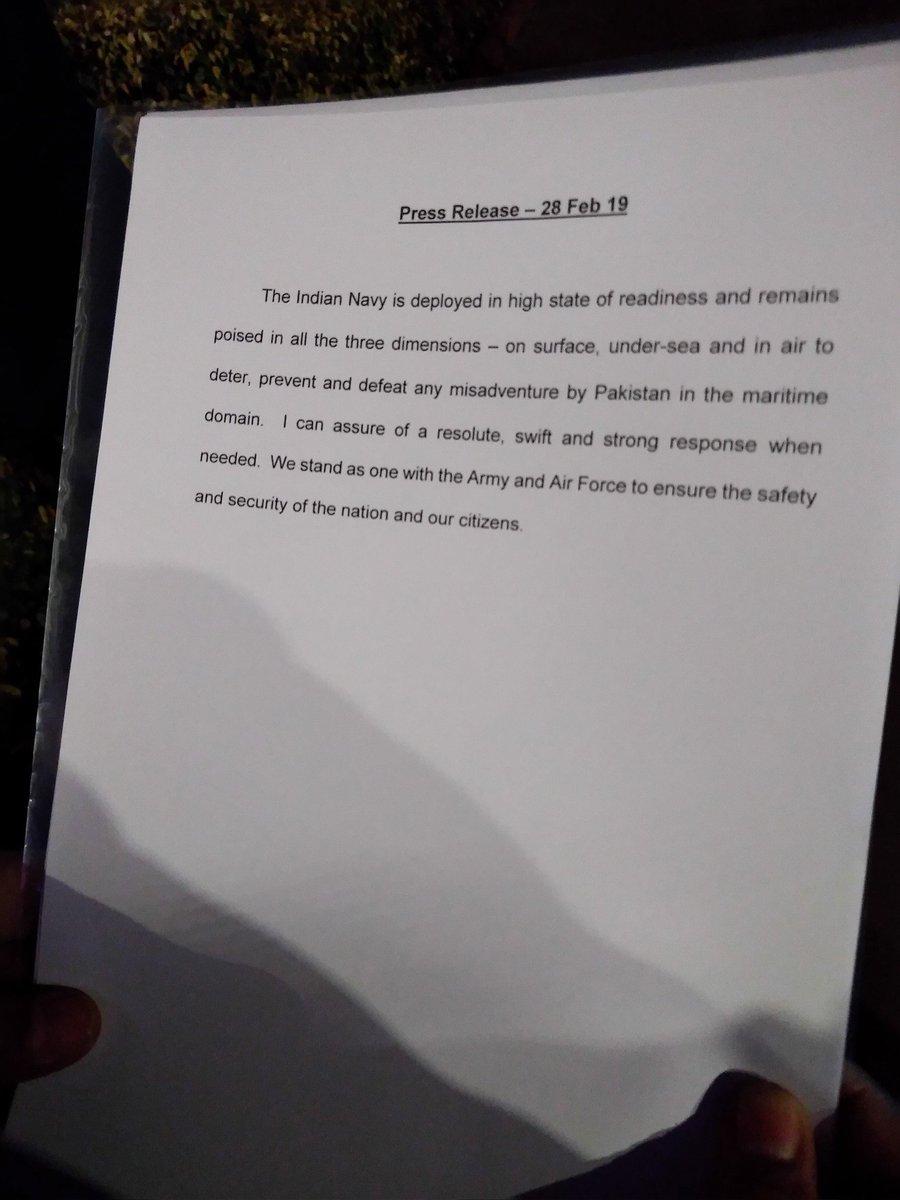 (Photo from TL of @delhidefence)

But then, unlike myself who believes in loooong threads, this good Admiral was soon done with his bit of statement.

By even before he was done, the Paki Navy Chief had made a mental note to take up a case for changing their own uniforms too from white, to brown pants!

The Indian Navy was already out at sea in full force! I’m sure the Paki Navy Chief, while changing into a fresh pair of undies, would be thinking about his predecessor during Kargil War and the fate that befell him, forcing his resignation a few months later!

Here’s a link about what the Indian Navy was up to, during Kargil War, in case you are interested – Link

The presser soon ended with the display of the mutilated remains of the AMRAAM. I’m sure the Brown Pants in Pindi would have breathed a sigh of relief, thankful that the brutalizing had finally ended ..

And then came the Qs and As!

The press corps tried their best to squeeze out some ‘juice’ from the ‘bland’ statements of the three gents who had just addressed them. I’m sure that only a few knew that those very statements had already squeezed the juice from a lot of brown panted ones across the border!

But then, the good Air Marshal, in response to a Q about the #BalakotStrike, very ‘drably’ said that we had achieved whatever effect we wanted by the way of the strike. Khatam!

The Brown Pants Propagandu-in-Chief made a mental note about the questions he himself would soon be asked!

Then one question came about which made me think whether a Paki or two had infiltrated the Press Corps in attendance – Was the IAF ‘grateful’ for the release of Wing Commander Abhinandan?

I swear I could almost see the good Air Marshal do a mental facepalm on hearing this!

And then he replied – It is the Pakis who should be grateful to their Brown Panted rulers who decided to release him, or else ..

Ok, so he didn’t use those exact words, but this is more or less the gist of what he conveyed!

Now let me take a few moments to convey my thoughts on this whole issue thus far.

The Indian side has had official spokespersons giving out statements on behalf of the GOI thus far, and this evening, three military men.

On Paki side, official Govt version was let out by the Brown Pants Propagandu-in-Chief because .. well .. Brown Pants basically own the country, no? However, an entertaining side show was also put up by their Beggar-in-Chief, to keep things light! 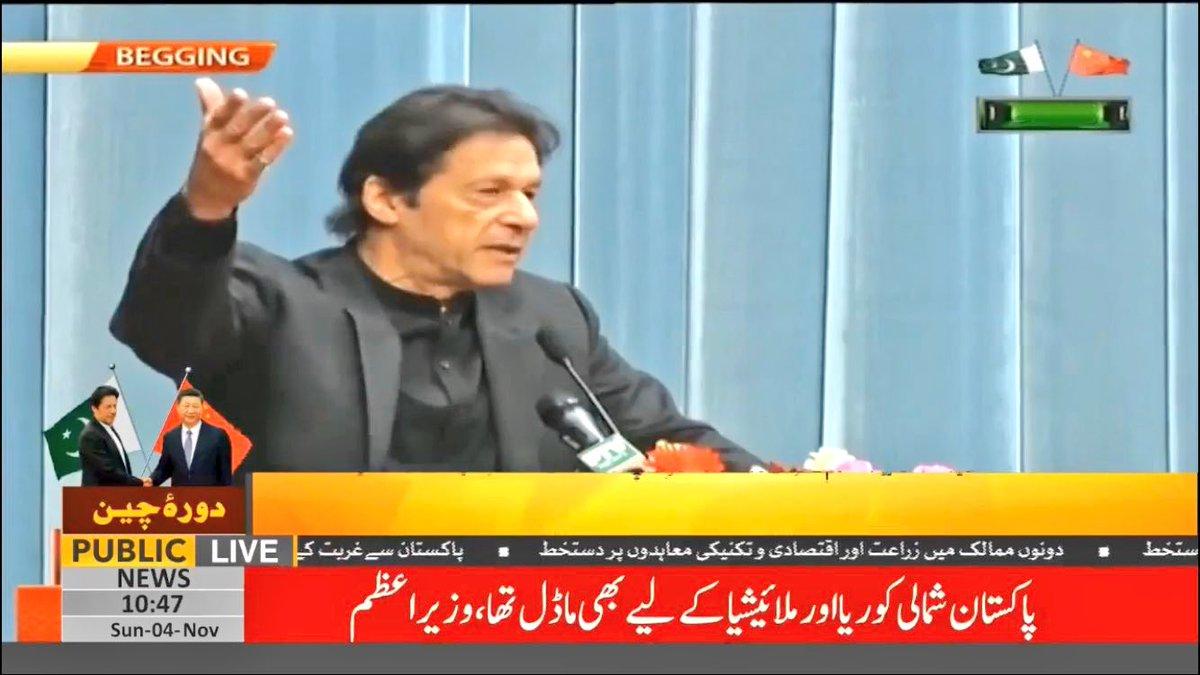 What happens next, I cannot say.

But I will definitely point out that the word ‘de-escalation’ nowhere figured in this evening’s presser. On the contrary, practically each and every service of the Indian Armed Forces assured the Pakis that they were raring to have a go at them.

In fact, at about the very time that these gents were addressing the press, Prime Minister of India was convening a high level meeting on security with all 3 Chiefs in attendance.

I’ll not say much beyond this.

Instead, I’ll leave it upto you to make of it whatever you wish to.

Things might heat up yet again, maybe after Wing Commander Abhinandan is repatriated, or maybe tonight itself.

One really cannot say how or what will happen.

But one thing that has in fact happened, is hiding in plain sight – India has forever changed the rules of this game two days ago when the MEA spokie said that the #BalakotStrike was a PRE-EMPTIVE strike.

This means that India, in future,may not wait for a successful terror attack in order to cross the borders again.

Read the above statement once again.

Let it sink in.

I’m sure the Pakis have already got the message, and the sinking feeling that comes with it  (Pun intended!)

How things pan out over the coming hours and days, needs to be seen.
Remember, it was business as usual till the #BalakotStrike happened.

It is again business as usual since yesterday.

Btw, I’ll just leave this pic of a bumper sticker here without any comment 🙂 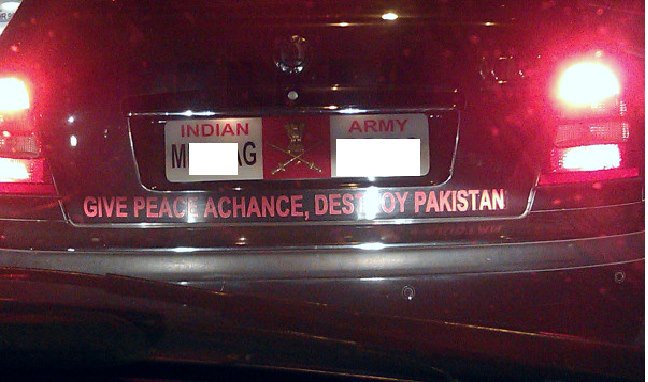 In the end, let us all rise from our respective chairs or beds or sofas as the case may be, and observe a minute of silence for the F-16 Jet!

What the Pakis managed to do yesterday was to give the F-16 its ‘Sabre Moment’!

Just like the much vaunted Paki flyboys managed to screw up the reputation of the F-86 Sabre in 1965 and then in case you had any doubts, they did it again in 1971 with the Starfighter thrown in for good effect, this time they’ve done it to the F-16!

You were a good bird, till such time you offered your cockpit & your stick to a Paki bum! (All possible puns fully intended!)

Talking about the F-16, I’ll leave this tweet from a nearly 3 year old thread here for you to see (Link).

The Americans have a HUGE stake in this stand-off. Their interests here include their weapons, given to Pakis to fight fcuking Taliban!

With this, I conclude this blog.

All I’ll say is I’m happy that Wing Cmndr Abhinandan is on his way back. That apart, whatever happens in coming days, or doesn’t happen, is inevitable.

I’ll just leave this tweet here to underscore my view.