Ok Folks, moving on from this tweet quoted below, sharing some thoughts on the recent events and how the game of headless chickens in Pakistan is playing out. All views are strictly personal, so feel free to disagree!

Firstly, I would like to thank this joker from the Land of the Pure for agreeing with me (refer quoted tweet above)! So what if he is an idiot, atleast he is an idiot who agrees with me!

But on a more serious note, it has been really interesting to see the Pakis fumbling around to find an ‘honourable’ way to deal with this ‘annexation’ of Kashmir by India.

Why they do it, you asked?

Well, would Shri Bajwa, or Shri Beggar-in-Chief Imran want to go down in history as the jokers who lost Kashmir, hainji? Loss of East Pakistan still hurts, and you want to add the loss of Kashmir as well?

You see where I am going with this?

But .. is Kashmir really lost? Of course not! Article 370 didn’t exist in 1947, or even in 1948 when the UN resolution was passed. So technically, nothing has changed when viewed from that lens!

And Pakis complaining about changing demography in Kashmir.. well irony might as well pick up a gun & go kill all those Shias of Gilgit-Baltistan whom a certain Brigadier Musharraf failed to kill when he ‘quelled’ a revolt against forced immigration of Sunni Pashtuns in their lands.

But then, why in the world are Pakis doing all this randi-rona over a non issue? Of course, the ‘intensity’ of it all caught even me by surprise. An event could have been commented upon with a one line statement and left as it was, has been made into a life or death struggle!

Well, I hypothesize that it is because they don’t know what else to do. Not after all that time and effort spent in indoctrinating their awam with all the crap that they’ve fed them.

Add to it the SPECTACULAR aerial ‘victory’ of 27th Feb, and you know they had no choice either!

Then there was the offer of mediation by Shri Donald, made hardly a couple of days before the rug .. err .. Article 370 was pulled by the GOI.

All in all, this could possibly explain their ‘confidence’ in raising hell, no?

Moreover, they are right on the verge of defeating yet another superpower through their proxies in Afghanistan. So close that even Shri Donald had to bow down to their demand of mediation in Kashmir!

Well, you see where I am going with this chain of thoughts, right?

So they did what comes naturally to them – they cried out loud. And then they realized – no one was paying any attention to them!

Even their request to the UN to ‘discuss’ the issue fell flat, until Shri Xi stepped in and made another request.

KASHMIR ISSUE HAS BEEN INTERNATIONALIZED, they yelled at the top of their voices, patting themselves on their backs!

All that China could manage was an INFORMAL discussion and with no statement at the end of it.

So what?, yelled the Pakis, atleast it was discussed in the UN! We won, they yelled as they danced around!

Well, none asked as to why their own rep and the Chinese rep just made their pre-prepared statements and scooted out, without taking any questions! And this when the Indian rep not only took his time answering all questions, including from Paki reporters, but he also .. very calmly .. gave a very polite middle finger to Pakis and Cheenis by reiterating that all that Pakistan needs to do is stop terror and India will talk!

Of course, they could never do it, esp after their own Prime Minister had made an all too public call for jihad just a few days ago! Then more details trickled in – the ‘informal’ meeting had been a disaster for Pakis and their Cheeni masters!

(LINK to above report)

No no .. UK supported us, crowed Pakis!

And voila, UK too decided it was time to clarify things! 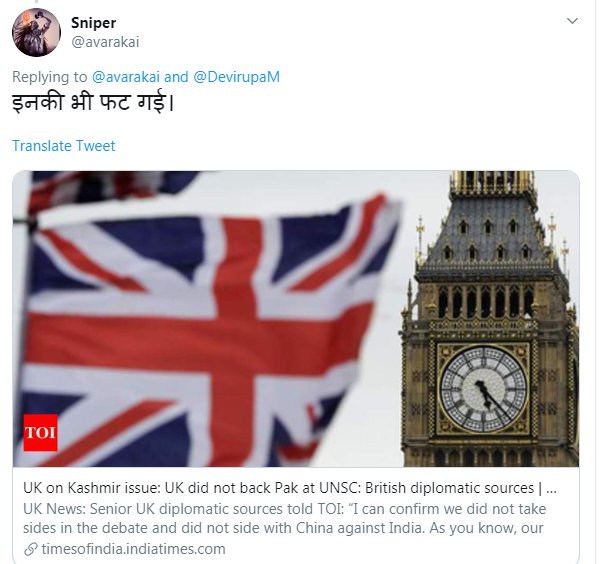 Then yet another joker in the Govt of Pakistan tweeted, thanking Maldives, Sri Lanka & Bangladesh for their support. They too replied, saying LIAR LIAR (BROWN) PANTS ON FIRE!

To cut a long story short, they’ve tried everything .. and failed. Even the US has clarified that there will be no mediation. All that they have succeeded in doing is to win the hashtags campaigns on Twitter, and symbolic nonsense such as observing 15th Aug as black day. 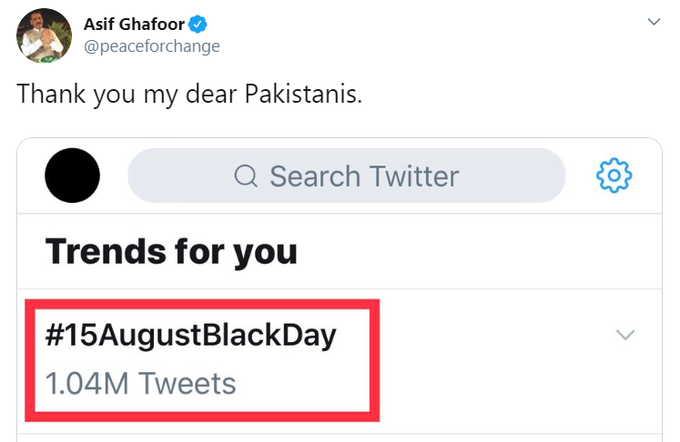 But then, as any sane person would ask, why don’t they stop?

Well, the caveat here is ‘sanity’ .. and no one ever accused Pakis of that!

I get a feeling that they simply cannot stop, even if they wanted to. Such is the hysteria that they’ve created. Their own public will hang them on the nearest lamp-post if they say that they’ve done what they can and nothing more can be done. And knowing that this GOI will not even give them a fig leaf of even a notion of victory, they simply don’t know what next!

On the contrary, Indians are talking about PoK, of all places!

And then there was the innocuous little statement about the NFU policy by the Indian Raksha Mantri.

So what do they do?

Well, they ratchet it up a few notches. None less than their delusional, selected prime minister threatens a nuclear war. Take that, you Indians!

Well, the Indians say nothing. And neither does the world.

All that the Pakis see is a big YAAAAAWN by all concerned!

So what comes next? Well, that is a million dollar question, isn’t it? Let me share the tweet quoted in the beginning of this blog once again.

After crying themselves hoarse, there is no way that the Pakis will NOT do anything. They simply cannot afford to. Like I mentioned some time ago, what this ‘something’ might be is a matter of intense speculation.

Their best bet is to do something within their borders. Maybe boot out Imran Khan for his ‘failure’ at getting a favourable international opinion.

It works in their favour ‘coz the Brown Panted ones will not have to worry about getting whooped on the LC / IB once again!

Who knows, maybe this is why Imran Khan is so hyper these days – to save his own job!

But, what I feel more likely is some sort of visible action within India – a terror attack, maybe. This time targetting civilians. It could be in the hinterland, or it could be in, say Jammu.

The best outcome for Pakis would be media attention, plus a bonus if India cannot use it as a reason for any cross border action. And maybe in preparation for that, they have already started loudly hinting at possible false flag operation within by Indian agencies themselves.

In case it comes to pass, they will be praying feverishly that no birds of prey come visiting another Balakot, because .. well .. having spun the 27 Feb fiasco into a splendid ‘victory’, atleast on SM, they KNOW that this time the Indian response would be much different.

All in all, they don’t know how to satiate the blood-lust of their crazed populace. Heck, even their Arab masters are playing a different tune- even felicitating Modi! Imagine the average Paki’s feelings!

It’s a vicious circle that the Paki establishment has created for itself.

A circle, from which it is difficult to emerge unscathed.

A circle, which only grows more vicious as their economy falls to newer depths.

A circle, which only grows more vicious citizenry discovers that their nation is merely impotent entity whose pleadings summarily discarded.

No wonder that the powers that rule Pakistan have to keep coming up with newer ways to prevent the anger from spilling over into their streets. Hence this 30 minute standing for solidarity every Friday!

But what happens when the awam starts asking as to why isn’t it working?

What happens when the mango Paki starts asking as to why India still hasn’t reinstated Article 370?

What happens when the mango Paki starts asking as to why the PAF doesn’t go and ‘teach Indians another lesson’ like they did on 27th Feb?

I am sure that there are important heads in Rawalpindi already wargaming such scenarios, and their possible reactions. I am also sure that they are waiting anxiously for the next FATF session to see how much they can get away with, esp after the recent APG thappad!

And I am also sure that they don’t know what to do next.

What this will turn into is yet another irrational response, which will invite yet another Indian response which will spell more disaster for them. Hence my speculation about something during the Oct – Jan window.

Well, it just came instinctively, without much thought.

But let me try and justify it, with the benefit of hindsight.

Firstly, monsoons in Punjab will be over and the battlefields more conducive to large scale manoeuvres as in 1971.

Secondly, the FATF sword hanging over the Pakis will have gone, whichever way it goes.

Thirdly, I think they can keep their awam ‘amused’ for about another month before they too run out of ideas of how to keep doing it.

Fourthly, maybe this is by then they will finally come up with yet another ‘brilliant’ plan! (Talking about this, let me leave this 6.5 years old tweet here for you)

So brace yourselves, fellow Indians, for the Brown Panted ones are in ‘heat’ once again. They WILL be forced to do something.

What form it takes, remains to be seen.

One gent has already gone on record saying ‘India started it, we will finish it’.

To that gent, let me just tell him that it has ALWAYS been Pakistan that has ended it – by waving the white flag!

Let me conclude this blog by sincerely wishing Imran Khan that he completes his full term!

2 thoughts on “On Pakistan’s Kashmir Conundrum!”