This chain of thoughts was tweeted on 12 April 2019. However, the good old moi forgot to archive it here in the blog. So here goes, even if 3.5 years too late!

Folks, sharing the story of the day my account ‘Temporarily Restricted’ by the good folks at Twitter.

It began late night on 10 Apr 2019. I had just finished yet another tiring day of chhutti, doing nothing, when I realized I should do something!

That something turned out to be a thread on Shri Propagandu-in-Chief and the ‘भसड़’ he had created about all his F-16s being alive!

So late, that by the time I finished the thread, it was not even 10 April, but 11th April! So I decided to call it a night and went off to sleep since I felt that I should be well rested for another day of .. well .. doing nothing!

I slept soundly that night, patting myself on the back for yet another brilliant thread. And then, despite it being a chhutti day, I still woke up almost at the crack of dawn – at 8am!

One ‘not so loving‘ glance from her and I decided to make my morning cup of tea myself! As the water boiled, I unlocked my ‘very’ smart phone and opened Twitter. Anticipation and Excitement was high. (Because of that ‘brilliant’ thread of last night, remember?)

Must be a new update, I mused.

Until my ‘very’ smart phone finally opened the app. And my world came crashing down!

The good folks of Twitter seemed a tad bit unhappy with me!

So unhappy, that they even created a graphic, just for me! 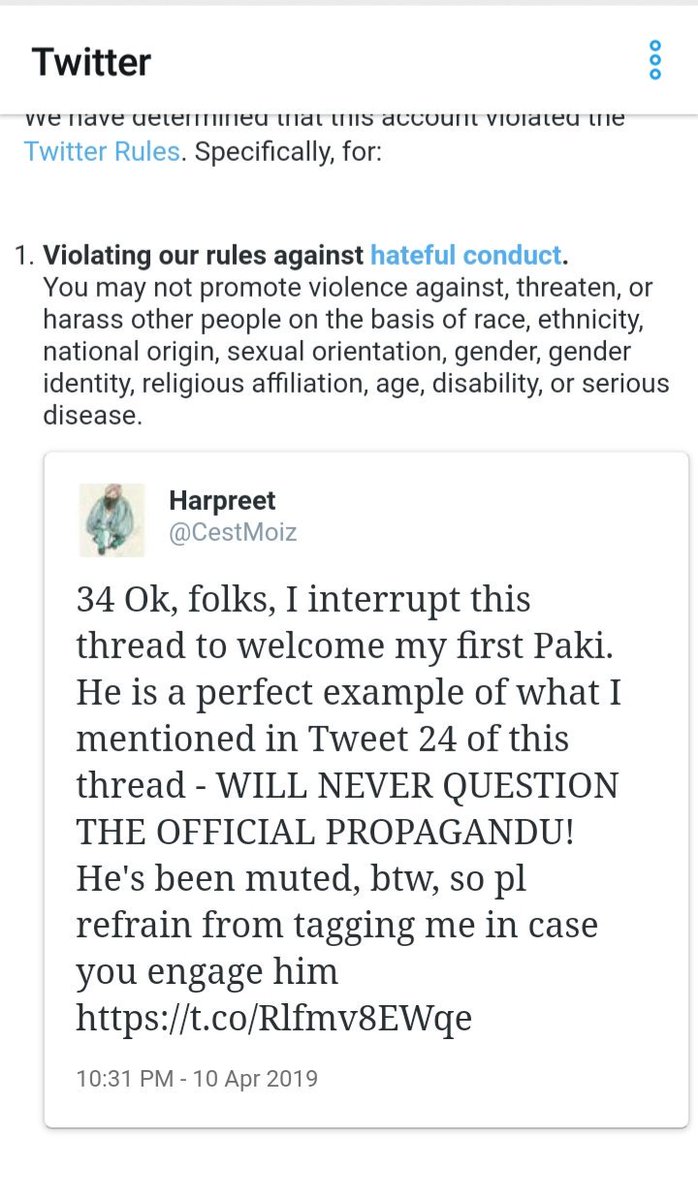 Disclaimer: Above graphic is shared strictly for academic purposes, lest I lose my account again!

So, the algorithm developed by the good folks at Twitter had decided that I was being hateful for calling a Paki, a Paki!

But they were still quite considerate, I must say.

Delete that tweet & you’ll have full control over your account within 12hrs, they offered. In the interim, you can browse twitter, but not engage with anyone except via DM, they said.

As I read the message, I could almost picture one of my strict school teachers admonishing me!

However, they knew that I too might have a point and that they might be wrong. So they even offered me an alternative to deleting the tweet. APPEAL, AND YE SHALL BE HEARD, they said.

But that benevolence came with a caveat – THY APPEAL SHALL TAKE SEVEN DAYS, it read.

I made a mental note: In case I make a social media app some day, I’ll hire the same legal experts as twitter. Atleast they have a sense of humour!

But, mental musings apart, there was a decision to be made.

Thankfully, I was prompt in making it.

I could almost hear a sigh of relief at the other end by the ‘good’ folks of Twitter!

Heck, I tried to listen closely and I swear, I even heard a faint applause!

So happy were they, that they couldn’t wait for the 12 hours to get over soon enough.

So happy that they even put out a countdown timer for me to track my ‘progress’!

I kid you not!

So the immediate issue taken care of, now I didn’t know what to do for the next 12 hours. I started thinking.

And then I sent out some DMs – OYE TERE KO PATA HAI MERE SAATH KYA HUA?

And right on the heels of those DMs came a mini outrage that made my notifications tab run faster than an Afghan hound! This was totally unexpected.

And that thread on the Propagandu-in-Chief (without the offending tweet, of course ) went viral!

But I still couldn’t engage with anyone. So I decided to go out for lunch, with some good folks of Twitter that I’ve connected with offline. More Twitter talk followed, even as I checked my custom made countdown timer.

9hrs and 6 minutes of penance left, it said. 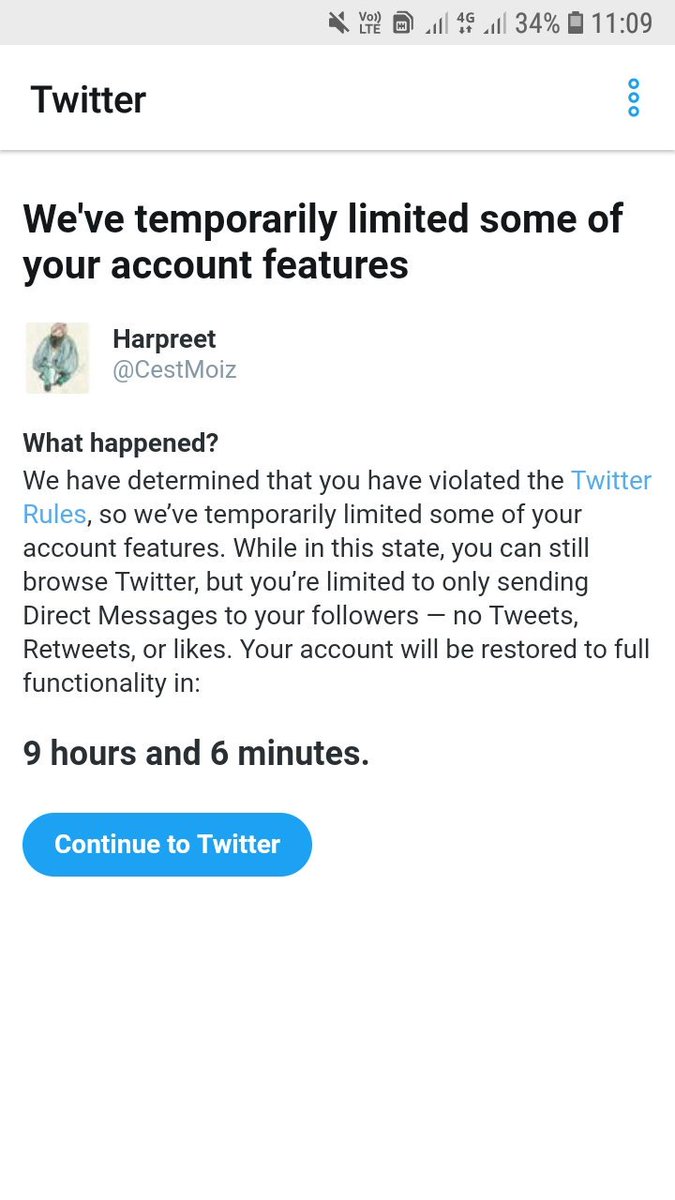 Dammit, I cursed, even as I sipped on my glass of nimbu paani. Atleast they could have added a ‘seconds’ counter along with the minutes and hours, so that the time could have passed a bit faster!

But, deep within, I was happy merely to note that atleast they gave me a timer!

It was a slow day indeed. After all, how long can one keep staring at a countdown timer, and that too without seconds, hainji?

So post lunch, I ‘volunteered’ to pick up the kids from their bus stop in the afternoon.

The kids were shocked!

Not because I had come to pick them up. But because I told them that we will walk the one kilometre to home! But then, time had to be passed, esp with my custom made countdown timer refusing to move any faster!

But my kids are tough negotiators, I soon realized.

Two ice creams each and I carry their school bags, they offered, in lieu of walking back to home. Ah, well, soon I was just about as overloaded as Shri Govinda Ji in Coolie Number 1!

But there was one big difference. Whereas he carried empty pieces of luggage in the movie, here I was, carrying what seemed like a tonne of load over my shoulders!

Somehow, we reached home. And after a quick glass of cold water and some lunch, I checked the timer yet again!

4hours and 50 minutes of penance pending, it said. 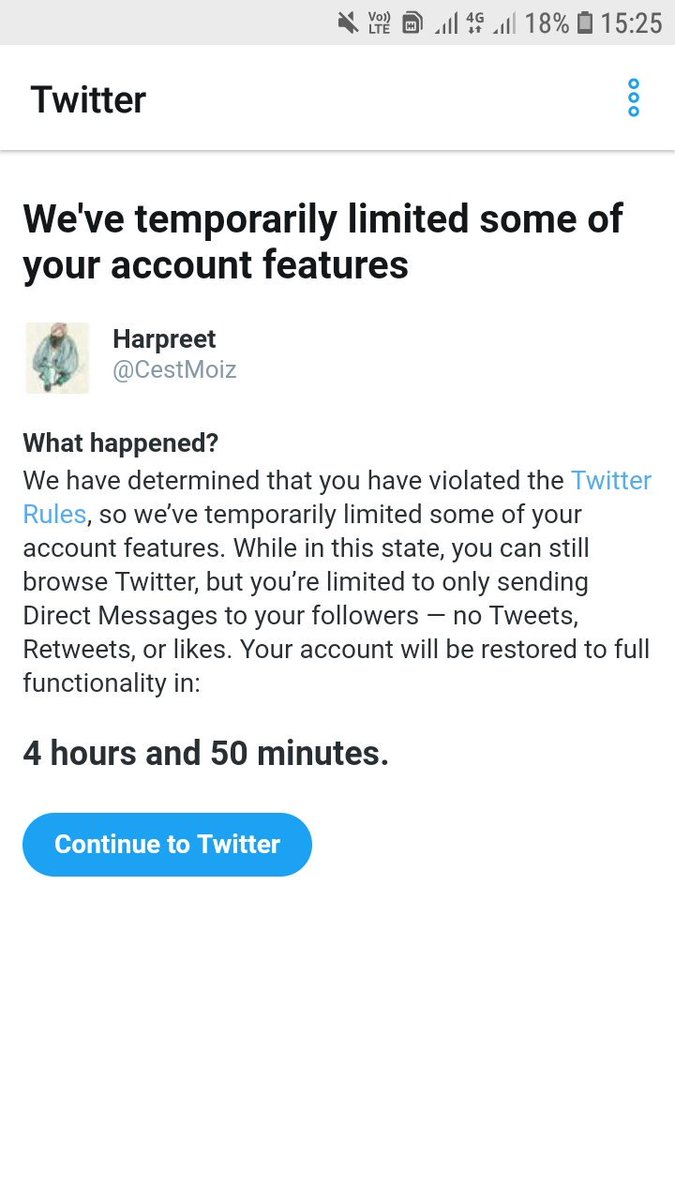 The forced वनवास was about to end!

In order to make it end faster, I promptly went to take a nap, even if a bit late in the afternoon!

And then I woke up! Two hours and forty seven minutes remaining, it said. 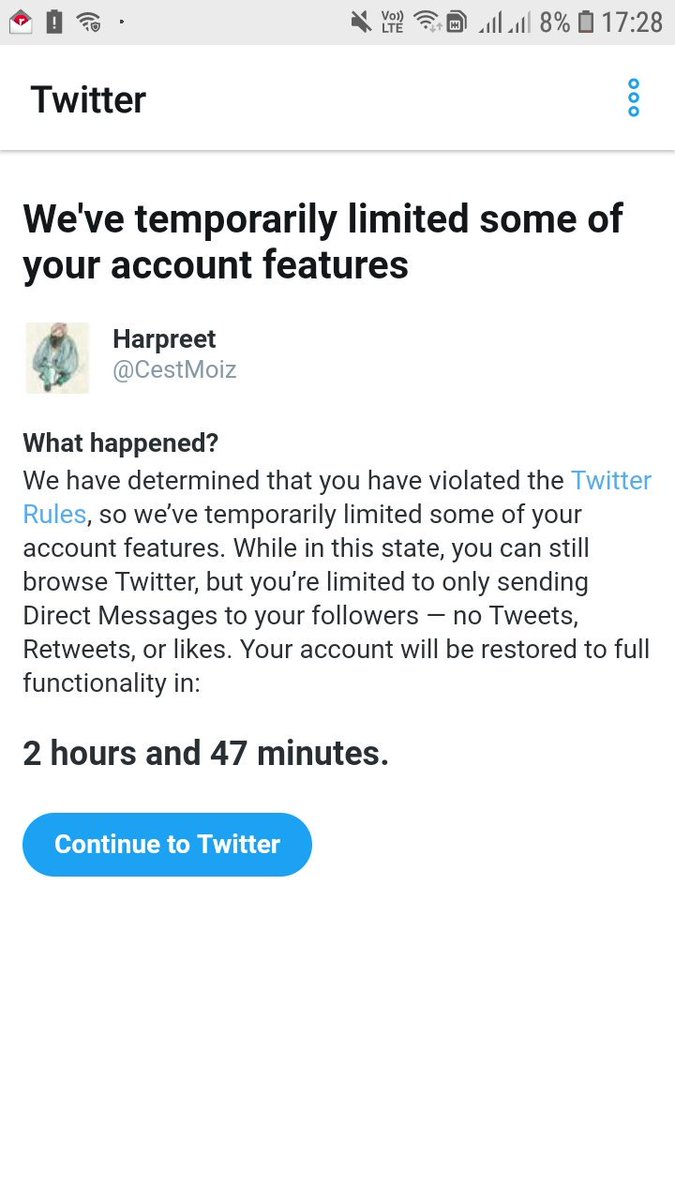 It took me a moment to realize that the echo was actually the Missus crying out to no one in particular when she realized that the maid isn’t coming!

So I spent the next 45 minutes ‘gainfully employed’, washing dishes! I still like to believe I actually ‘volunteered’ to do that, instead of she ‘requesting’ me to!

But thankfully, the clock ticked on and soon it was a mere 15 minutes before I was deemed reformed by the good folks of Twitter. Those were perhaps the longest 15 minutes of my life in recent past!

As the timer ticked and tocked down to ZERO, I said a silent prayer & logged in.

The first thing I did was a say a silent thanks to all those who had outraged for me that day. And then I quickly posted the #ObituaryOfTheDay tweets for that day, lest I get locked out yet again!

And then I re-tweeted that offending thread since it had been broken due to that tweet getting deleted. Of course, this time I took care NOT to tweet that tweet again, but then, it was no longer needed since that Paki didn’t return!

Thus ended the story of my day in penance. As regards the word ‘Paki’, I’ll just leave this news report here without any further comment!

Bartania: A Paki calls another Paki, a Paki & the Paki complains to the Police for being called a Paki by a fellow Paki!

Try and make some, or ANY, sense of it if you can!