Skip to content
HomeOn the Ladakh Standoff Between Indian and China

(This chain of thoughts was tweeted by me on 01 June 2020. Plugging it here for archival purposes) 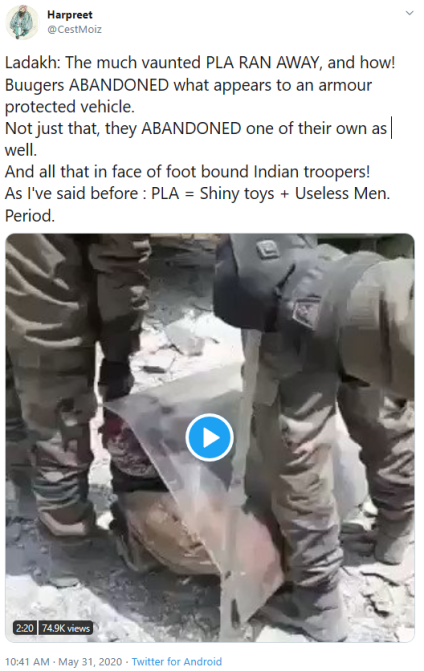 This tweet above and the video embedded therein generated quite a bit of ‘excitement’ on my twitter Timeline. So I thought I’d share some thoughts on the current snafu on the LAC.
But before moving ahead, let me offer a disclaimer. I don’t intend to go into the specifics of the alignment of the LAC between the two countries. Enough has already been said on that, by the doomsday walas as well as the ‘All is Well’ walas.
Instead, what I intend to talk about is my thoughts on the fairly regular ‘interaction’ between the two militaries on the LAC, one aspect of which is depicted in the video above. Do watch it before reading ahead in this blog post, if not watched already. Here it is –
That there is a dispute, is undeniable.
But then, what exactly is this dispute that we keep hearing about?
Well, to put it simply – the two sides do not agree as to where the LAC lies in a few sectors – thus what is called ‘Claim Lines’, wherein both sides feel that the other side claims ‘their’ land. THIS is the ‘difference in perception’ that the Raksha Mantri talked about some time ago.
With both sides keen to retain their claims, patrolling parties inevitably ‘cross over’ into areas claimed to be theirs by the opposing side.
Hence the occasional video / photograph of both sides engaged in shoving and jostling with each other.
This is the ‘normal’ interaction between the Indian Army and the PLA.
Sharing some photographs to put things in correct perspective before moving ahead with my observations. 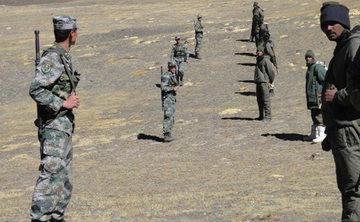 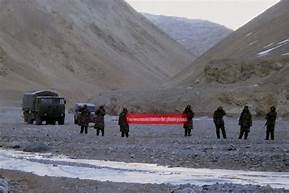 Here is a video as well, for those interested. Do watch it, atleast partially before moving ahead, since it has a bearing on what in intend writing further.
https://www.youtube.com/watch?v=J14PCv5rRcc

Did you notice something?

Did you see a difference from the way the Indian Army ‘interacts’ with the Packies across the LoC? Here is a video of one such ‘interaction’ that I am talking about –

The LAC too is disputed. But we don’t see such videos over there, right?

Once again, refer back to the photos & the video of IA and  PLA shared above.

Did you see that both sides are carrying their weapons?

Yet they choose NOT to use them and instead, keep them slung behind their backs?

BOTH sides follow this rule religiously. Ever wondered why?
Could it be due to an understanding – formal or informal – of NOT escalating things beyond a certain point?
I’d say YES.
Both sides are content to raise banners to inform the other of transgression into their claimed areas, which might of course, overlap with the other side’s claim.
This, folks, is the ‘routine’ interaction on the LAC.
Why I use the word ‘routine’?
Because visuals from Doklam days and this current video posted in the first part of this blog indicate that when things are NOT normal, they usually don’t even carry weapons!
Don’t believe me?
Just watch the video in the beginning of this blog post and search for any weapon apart from sticks!
Or this video below from Doklam days in which the only ‘shooting’ being done is from cameras. Once again, no rifles!
https://www.youtube.com/watch?v=84b1PSOQAaU
The thing is, despite all sorts of provocations at higher echelons, the interaction on the ground between both armies is diligently kept below a level that might cause grievous bodily harm to anyone from the other side.
Bottomline: NONE seek escalation beyond a point.
Period.
So what about all those reports of a buildup of ‘tens of thousands of troops’ behind the area of the current standoff?
Well, didn’t we hear the same during the Doklam days?
Oh, and talking about Doklam, that standoff lasted nearly 2.5 months whereas this one is less than a month old!
Mind you, I am not saying that this too will follow the same template as in Doklam.
Things might still go downhill. It is about whether both govts can come up with a via media wherein a de-escalation can be ‘sold’ to domestic audiences as a ‘victory’ by boths sides, real or imagined.
It is HERE that the current issue lies.
Like it or not, the release of the video of the Chinese boy captured by the Indian troopers and the counter visuals of Indian troops in Chinese hands do not help the cause.
Is it a cause for worry, though?
Of course, it is.
But not for reasons we might think.
In a far-fetched contingency, in case guns do start booming, will such scenarios matter?
No Way!
First of all, the last time that guns boomed on the LAC was in Sep-Oct 1967, i.e. more than half a century ago. And unsurprisingly, it was the Chinese that came second best!
For those who aren’t aware, just google for Chola and Nathula clashes.
Yet, we remain fixated with 1962, not realizing that there too, wherever he was led well, the Indian soldier stood like a ROCK in the path of Chinese hordes, making them pay dearly with their blood for every inch of territory they gained.

But is it to say that this current standoff too will degenerate further in to a shooting match?Well, thus far, I’ve seen both sides exercise enough caution to indicate that they are not really interested in that. (Once again, I’m NOT going to talk about merits / demerits of that)

However, at the end of the day, despite all policies and agreements on that account, it remains the soldiers on the ground who are ultimately entrusted with ensuring that it remains thus.
What is to say that in the heat of the moment, a Jat, or a Sikh, or a Gorkha, or any other soldier of the Indian Army, or for that matter, one from the PLA will NOT end up losing his cool and end up initiating a chain of events that may potentially take the entire situation downhill?
Remember, the Chola clash of 1967 started not with a rifle being fired, but a Khukri being flashed, resulting in a Chinese sentry losing his arm to a Gorkha soldier of 7/11 Gorkha Rifles of the Indian Army.

As I’ve said before, human element plays a big role.
It is here that the military leadership at lower levels assumes paramount importance. To that end, hats off indeed to the immense maturity displayed by the young Indian commander in the video at the beginning of this blog post, in ensuring that the captured PLA boy doesn’t come to more harm at the hands of his men.
But then, what exactly happens in case situation deteriorates and guns actually end up opening up again on the LAC after nearly 53 years?
First of all, all those beautifully pitched tents of the PLA being shared as photographic evidence will be up in smoke for sure! Satellite imagery works both ways, no?
In any case, this is very nearly the same area where TWO Param Vir Chakras were earned by the Indian Army in 1962 – by Major Dhan Singh Thapa and Major Shaitan Singh – both extracting the lives of thousands of PLA troops in the process.
But can today’s PLA afford the same tactics? Especially with One Child Policy and their recruitment base comprising entirely of ‘Little Emperors’ who are used to a cushy lifestyle? How will they live in Ladakh without their oxygenated tents? Do read this  – Chinese army is full of wimps, sissies & little emperors. We are not saying this. This is what China thinks
But then, the above can surely be dismissed as a merely academic point of view and not truly reflective of their fighting capabilities, right?
Well, of course!
But fact remains that the last PLA soldier to fire in anger at an enemy was way back in 1979 during their invasion of Vietnam where they went to ‘teach Vietnam a lesson’.

But it was they who ended up getting ‘taught’, that too when a large chunk of the Vietnamese Army was employed in Cambodia at that time, fighting the genocidal Khmer Rouge regime!

But that too was more than four decades ago, so it may not hold true today, right?
Well, the last time the PLA troops came under fire was as late as 2015 in South Sudan. But then, instead of putting up a fight, they chose to RUN AWAY!
I wrote a short blog post about that some years ago. MUST read – People’s Liberation Army – Calling the Bluff
As a follow-up of that incident, I came across the account of the battle by the Indian company commander who pulled PLA nuts out of fire. He says that when he asked the PLA commander as to why they abandoned their post, the answer was ‘Because it was not safe out there.’
Yes, this was a commander in a professional, well equipped army, talking about a situation created by a rag-tag militia in South Sudan!
Here is the blog post that chronicles that exchange. A lot of interesting nuggets of information in that as well – People’s Liberation Army – Calling The Bluff (Part II)
But coming back to the current standoff, that we (as well as the Chinese) choose not to escalate and instead, seek diplomatic solution instead of military escalation. It is not a reflection of the professionalism of the Indian Army, but instead, a well considered decision of the Govt of India.
And dare I say, the Govt of India doesn’t choose this option from a position of weakness, but from one of strength, with full confidence in its army to deliver on whatever directions it gets. Doklam is a very recent example of this.
Cant’ say the same for the PLA, though, given their performance under fire in South Sudan. Till such time the rifles are slung behind the backs on the LAC, no side has a relative advantage. But in a scenario when this no longer holds, the Indian Army is well capable of ‘surprising’ the hubristic PLA.
An India-China showdown is inevitable, given that both are jostling for the same geopolitical space.
But that is not to say that it will happen right now!
It will happen when it happens.
This blog post chronicles my views on this aspect as well – China & India – Together Ahead?
As for the current standoff, I’ll just leave THIS piece here. Make your own assumptions.
Oh, and talking about ‘Little Emperors’ that make up the PLA soldiers, HERE is another piece that first came to my notice some years ago. Worth a read.
To conclude, those predicting doomsday for the Motherland would be well advised to take a swig of their favourite alcoholic beverage in order to calm their nerves. An escalation may or may not happen, but even if it does, trust your army to deliver!
In the end, let me share some thoughts that I blogged when the Doklam crisis was still ‘hot’. Similarities with the current one might still emerge. Here it is – Doklam Standoff: Thoughts on the Endgame

One thought on “On the Ladakh Standoff Between Indian and China”