(These thoughts were shared on twitter last night. Putting them here for archival purposes)

Folks, moving on from THIS blog of last night to the developments that have taken place since, especially in light of what the Indian Prime Minister and the External Affairs Minister said earlier today.

But first, let me take you back to yesterday afternoon. This news first broke at about 1:00 pm on 16 June 2020. Now that in itself is very interesting! The Govt of India chose to wait for nearly 16 hours to make the report of the incident public.

Now what might have gone on within those 16 hours is anybody’s guess – The GOI might have been trying to get a clear picture of what actually happened, or might have been working backchannels to prevent things from spiralling further .. It’s all open to speculation.

But then, there was one interesting news that also came about almost simultaneously with the story breaking – that the Indian authorities will do a formal briefing at 2:00pm.

Heck, I had to pend my lunch break, waiting for that briefing.!

Somehow, instead of being disappointed, I was reminded of a similar press conference from last year that too got postponed for reasons unknown!

(Here is the link to the blog post in which that thread was archived – Thoughts on the Balakot Strike: Part III – The Tri-Services Presser in New Delhi)

And true to that intuition, soon thereafter came a couple of tweets from China – thru Shri Hu Xijin, as well as the Global Times, acknowledging the ‘violent’ faceoff, but surprisingly, also acknowledging that the Chinese side too had suffered casualties!

Now this was really interesting.

You know why interesting?

Because till that time ,the GOI themselves had not said anything about casualties on the Chinese side.

To top it up, Shri Hu also seemed a bit ‘subdued’ from his characteristic bombast of recent days – calling for sanity to prevail, of all things!

Feel free to disagree, but to me it sounds like a plea not to escalate things any further.

Ok, ‘plea’ might be something that some folks may not agree with, so let me call it a ‘request’ instead.

Bottomline – The Chinese were not prepared for this magnitude of casualties on both sides. The very fact that they agreed to casualties on the PLA side and also said that they wouldn’t want to disclose their numbers, said as much.

They were willing to engage India towards de-escalation.

Ultimately, the Indian Ministry of External Affairs gave out an official statement in the evening.

It was clear that the Chinese were unwilling to listen to reason. The MEA chose to lay the blame squarely on China. This was also the first official statement from India saying that the PLA too suffered casualties, btw.

Mind you, in the middle of it, social media ‘warriors’ (myself included!) had gone ballistic at the sheer magnitude of casualties suffered by own side.

Let it suffice to say that this ‘violent’ faceoff has been far too ‘spectacular’ to simply wish away.

It just cannot be.

Once again, let me draw an analogy with the Pulwama Attack of last year. This one too is not much different from that attack.

The sheer anger that it has generated means that the GOI simply cannot NOT retaliate.

Not retaliating would not only dent the image of the Nation, but also be political suicide for the Govt of the day. Heck, the ghost of 1962 still hangs around the neck of the then Prime Minister. So no, it wasn’t a surprise that the Prime Minister said what he said in his address to the Nation in light of the loss of own troops.

His words were poignant and loaded with meaning.

The Prime Minister himself saying those words means that the back-channels that back-channels to seek any mutually agreed way out of this mess have failed.

Of course, as I said before, it is far too big to ignore altogether.

Of course, a hardened Indian stand doesn’t suit the Chinese plan of just browbeating the Indian Army without having to actually fight them man to man, right?

The subsequent statement of the Indian External Affairs Minister too made the Indian stance abundantly clear – there is no way this latest provocation from China will be left unpunished.

But a ‘photogenic’ army and an effective army are two very different things, no?

Wrote a blog on that some years ago. Do read – People’s Liberation Army – A History of ‘Valour’

But then, the big question is – WHAT COMES NEXT?

This is what I wish to devote some time on, hereafter.

One thing is for sure – the way the Prime Minister and the External Affairs Minister have spoken, something will most likely happen – something very visible.

The earliest that we may see some announcement is 19 June when the all party meet shall take place. At the very least, I feel there is some sort of economic retaliation coming up against China. Let me delve on that for a moment, before moving ahead.

India’s trade deficit with China is more than $50Bn, despite all assurances by China to try and redress this imbalance. So economic retaliation does make a lot of sense. After all, China stands to lose much much more than India.

But then, this is NOT what I am getting at.

What I am more interested in, is how China takes economic sanctions from India, if it actually happens!

How they react will be really interesting to see, even if Indian sanctions are merely pinpricks compared to what the USA is doing to them!

Would the manic ego of the Chinese comrades permit them to swallow such ‘humiliation’ at the hands of an ‘uppity’ India?

With the USA, it can still be justified – it gives them a sense of having ‘arrived’, when the sole superpower is fighting an economic war with them.

Herein lies a challenge as well.

Will this induce China to mellow down their military stand on the LAC?

The sheer ego of the commies that occupy Tibet will prevent them from accepting such ‘humiliation’, that too at the hands of a supposedly ‘inferior’ neighbour.

So no, do NOT expect China to ever let go of their claims over the Galwan area by such no-kinetic means. They won’t  back-off just like that. In fact, economic measures might actually exacerbate the military situation on the LAC.

Well, first thing first – Til the time the LAC provocations were limited to face-offs and fists and kicks, it didn’t really matter how many troops were amassed behind, so long as you could maintain numerical superiority at the point of face-off itself.

However, in case the guns start booming, this won’t be the case.

Remember, there are THREE aircraft carrier of the US Navy patrolling the South China Sea and thereabouts!

So coming back to Ladakh – Can they build up numerical superiority to actually militarily enforce their claims?

And then comes the question of how much numerical superiority is considered enough. Remember, the Indian EAM said it was a pre-meditated attack by China on the night of 15 June. YET, the PLA suffered fatal and non-fatal casualties to the tune of 40+.

Some ‘pre-meditation’, this, huh?

Now let me further spice things up a bit.

What is to say that a military clash, IF it comes, will stay localized to Ladakh?

I am surprised that no one is yet talking about this, atleast none that I came across on my TL.

When it comes to China, a LOT of historical wrongs are long pending to be righted. That includes the case of Coco Islands as well, doesn’t it? 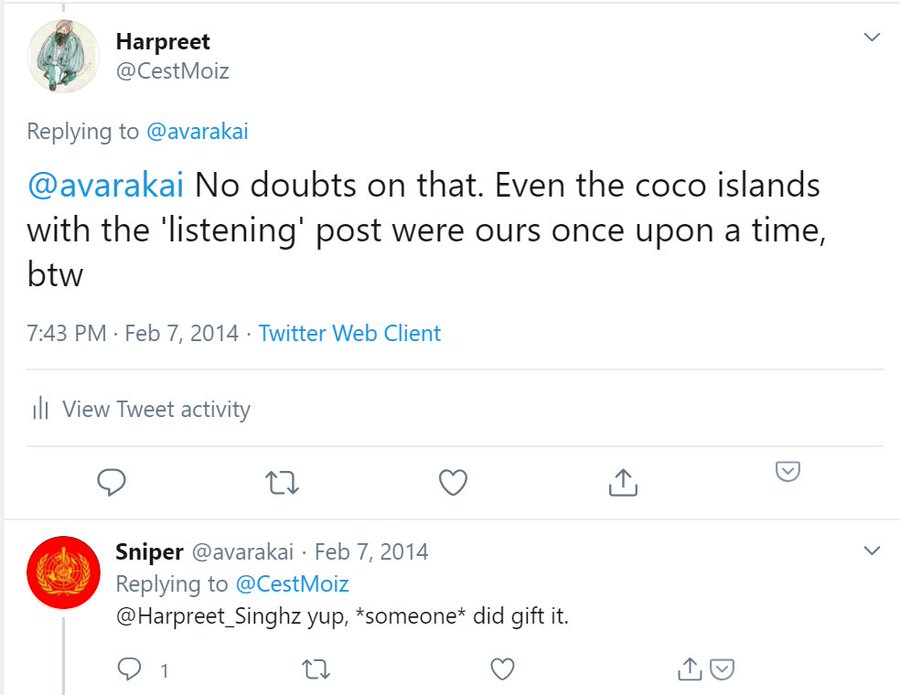 Feel free to mull over it for a moment before moving ahead.

To sum it up, escalation is very easy to achieve. Heck, the Chinese have just given us a beautiful example of that in the Galwan River area over the past few days and weeks.

But then, when it comes to de-escalation things are not so simple. Especially when you DON’T want to ‘lose face’.

And herein lies a huge challenge.

Especially when there has been such a grave provocation.

Will the Chinese agree to de-escalation wherein India gets even a ‘notion of victory’?

The CCP will simply HAVE to be ‘victorious’, whatever the case may be.

Such is the nature of communist regimes.

They just cannot be seen to be weak.

So brace yourselves, folks. The coming days promise to be really interesting indeed, to say the least. Indian retaliation may or may not come tomorrow, or the day after, or even next week. But come it surely will.

The first steps are likely to be economic. Military steps, much needed, if they indeed happen, might come later.

The Post-COVID world that I talked about a couple months ago seems to be shaping out just as I thought it would. This blog might be worth a relook at this point in time – The Post COVID-19 World

The above blog was followed by another one, talking specifically about India-China relationship in context of Taiwan. Do read it as well – India-Taiwan Relationship: Time for a Reset?

If you think an India-China war is coming, well let me break some news to you – It has already started when the PLA came into Galwan with intentions to stay, instead of leaving.

The thing is that the wheels of history seem to be moving faster and faster with each passing day.

A lot of changes are likely to come by very soon, including possibly in national boundaries.

Brace yourselves; it will be nothing short of a roller-coaster ride!

In the end, I’ll just leave this statement here:

26 dynasties have ruled China over the past 22 centuries. CCP is just the 27th, and just about past the average the average lifetime of such dynasties.