So THIS statement by the Prime Minister of India has set a lot of knickers on fire, unsurprisingly, on BOTH sides of the border. 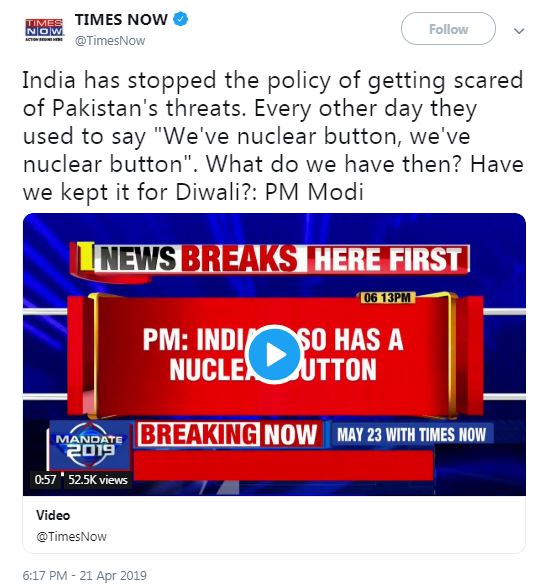 In light of this, I’m some thoughts on calling Pakistan’s Nuke threat.

There was a recent spate of statements from Pakistan, threatening pre-emptive use of tactical nukes against Indian forces even as they might be in their barracks / staging areas. 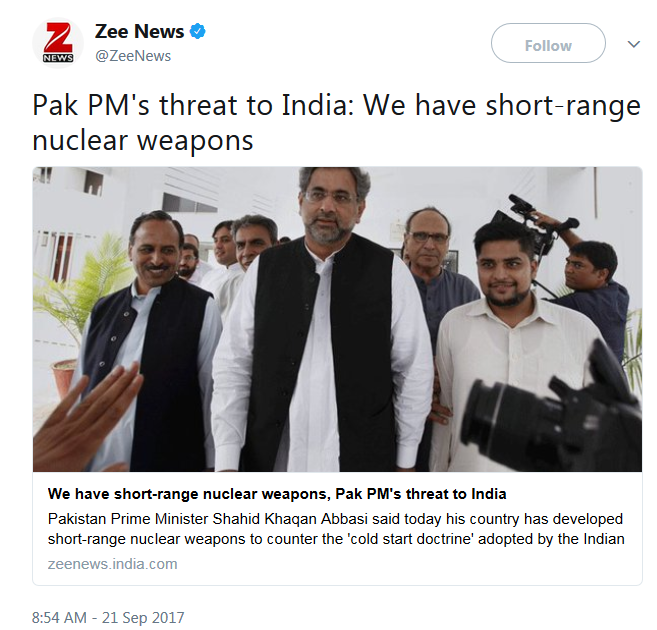 Firstly regarding the preferred delivery mode – the Nasr missile. With a diameter of just about 30cm,I find it laughable that Pakistan actually has a working bomb of such dimensions. I may be wrong out here, but would be willing to hedge my bets on this account due to the fact that they’ve not tested since 1998, and are working at best, on unproven designs.

Secondly, despite a stated first use policy, they’ve been silent on what constitutes their red lines. In case of a stand-off that might play out on lines of Op Parakram, wherein strike elements actually moved in close to borders, a pre-emptive use by a panicked field commander might lead to a bloody war instead instead of what might instead have been mere posturing.

And mind you, I am not even contemplating a Jihadist in Khakis, and there is no dearth of those, mind you!
Just read THIS piece before proceeding ahead.
I insist.

Here’s a quote from the Brigadier: “We should fire at them & take out a few of their cities: Delhi, Bombay, Calcutta,” he said. “They should fire back and take Karachi and Lahore. Kill off a hundred or two hundred million people”
Unquote

And he had unfettered access to the Paki PM, btw.

Thirdly, in case a Pakistan justifies a pre-emptive strike on account of a threat in being of an Indian attack, can the same premise – an imminent nuclear strike, as proclaimed by Pak – not be used as a premise for a ‘pre-emptive retaliatory strike’ by India, as part of its NFU doctrine?

Btw, I just realized I had tweeted this phrase ‘pre-emptive retaliatory strike’ on 25th Oct 2015, nearly three and a half years before the IAF actually did the Balakot Strike (See screenshot below)! Let me take a few moments to pat myself on the back, before I continue!

Ok, enough back-patting .. back to the blog now!

Fourthly, if Pakistan Army truly believes that even a dozen sub kiloton nukes can actually stop the might of Indian strike forces, they are going to be in for a rude shock. They know it too. And if they don’t, well @bennedose explains it quite well in this video below

That brings us to the next question – ‘What Next?’

Stated Indian Nuclear Doctrine doesn’t differentiate between tactical nukes or any other type of nukes. Massive retaliation is the stated response that will visit them soon thereafter.

Being a military which has such strong survival instincts that it is not beyond sacrificing its own pimps in Kashmir, Kargil, AfPak & elsewhere; to expect Pak army to risk its very existence is a fallacy.

The Brown Panted ones WILL sue for peace when on the verge of defeat. And then spin it as a victory for the consumption of their gullible masses. The latest example is the Balakot Strike and the F-16 loss the next day.

Now coming on to the conventional nuke threat – with designs that are presumed to be indigenous to Pakistan, and NOT supplied to them by their Chinese friends. Why I say this? Well, here is why :- 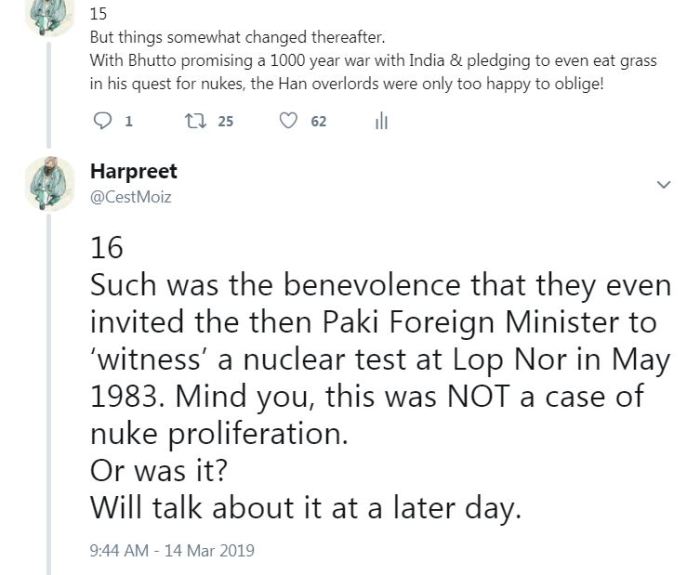 The entire world knows that conventional nukes are for deterrence, and NOT for use in a war because .. well .. in case that happens, no one lives to celebrate victory.

But our dear friends in Pakistan have been fed on a steady diet that their valorous brown panted ones WILL nuke the kafirs to their East in case of a war.

The number of Pakis talking about nukes so casually is a stunning pointer to how far down the drain they’ve gone. At some level, this can be justified. Justified by the glaring disparity in conventional forces of India and Pakistan, the bluster of Brown Pants, esp their Propaganda-in-Chief of ISPR notwithstanding.

Till 25th Feb 2019, the Brown Pants were firm in their belief that a nuke umbrella gave them a ‘Get Out Of Jail Free’ Card when it came to poking India.

It was demonstrated right after the nuke tests of 1998 when that very winter Pakis occupied winter vacated Indian posts in Kargil.

That India could choose to react with extreme violence never occurred to the Brown Panted ones, led by their wise leader- Shri Musharraf.

But guess the GOI didn’t get the memo which stated Indians were just supposed to turn the other cheek!

And then the Indian Army came calling. And Shri Musharraf ordered his favourite military maneuver – one that he had himself perfected in 1965, 1971 and later in the late 80s, in Siachen – he ordered his Brown Panted Army to run back!

However, I suspect that the Kargil war stayed limited to North of Zojila and didn’t end up in a 1965 type situation must have bolstered their belief that nukes had indeed saved them from a greater embarrassment.

I’m sure this was further reinforced when the GOI decided not to attack Pakistan during Op Parakram, even after the Kaluchak attack. And then came 26/11. Indian forces weren’t even told to mobilize.

The nuke bluff seemed to be working, they must’ve thought.

That India might have had different compulsions in doing what it did, or did not do, never occurred to the Brown Pants.

All this changed on 26th Feb 2019 when the IAF breached all ‘unwritten agreements’ and came calling over the Balakot terror factory inside Pakistan proper.

The ‘Crazy Man’ image that the Pak Army had created for itself had gone bust.

An India which wasn’t deterred by the ‘Contrived Irrationality’ of Pakis was something new.

Events which followed the day after – India not even bothered by Paki Propaganda of no F-16 loss must have only confused them further. Nothing says this louder than the spate of juvenile tweets from the official propaganda handle of the ISPR.

And then the Indian PM said what he said recently!

With this, folks, the Pakistani Nuclear Bluff is well and truly called for what it is – Hot Air.

Expect more shrill noises from them, and of course, some folks within our borders as well.

Now, lastly and most importantly, is the reqmt of making the sponsors of Pak nuclear pgme pay in case nukes gifted by them to Pak (Ref Lop Nor, May 1983 – Para 14 here: http://www.globalsecurity.org/wmd/world/pakistan/nuke.htm ).

Here’s a screenshot from that, even though the entire report is a highly recommended read:-

This is important since now ppl will be shouting the loudest, in the aftermath of the PM’s statement.

Nothing fancy, but just an ‘innocent’ statement to this effect by one of the many semi-govt ‘loudmouths’ in reply to such statements from Pak would surely raise hackles in a LOT of world capitals. Given blatant nuclear proliferation in arming their cat’s paw, they too deserve ‘some’ anxiety atleast, given that India is forced to live with a nuclear armed mad dog at its doors.

Talking about ‘Cat’s Paws’, I had put out a blog post some days back about China engaging Indian security apparatus by its hired lackeys. May have a look – China & India – Together Ahead?

But coming back to the topic at hand, once we have atleast a half dozen or so Arihant class boats prowling the seas with an assured second / third strike package, perhaps then the nuke benefactors will feel some bit of ‘anxiety’ that I talked about a few paragraphs above.

Bottomline – Nuclear sabre rattling is just like riding a tiger.

Nukes are NOT to be used in a war, unless it is the ‘very last’ war this world sees.

Tomorrow a rabid, brainwashed population may not leave you with a way out.

Oh, and talking about a brainwashed population, I finish this thread with a link to this blog post from some months ago – State Sponsored Radicalization in Pakistan’s School Curriculum: Part 1 of 3